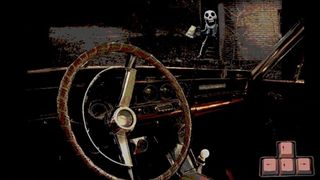 A masked axe murderer approaches your car, but it won’t start. You frantically turn the key in the ignition, until the engine finally sputters to life and you make your escape with seconds to spare. You’re jamming shells into a shotgun as a shambling zombie approaches, and you manage to load it and pull the trigger moments before your brain gets eaten. Your flashlight’s batteries die suddenly in a dark and dangerous place, and you furiously whack it with your hand until the light flickers back on and you breathe a sigh of relief.

These are just a few of the classic horror movie cliches Spookware, a WarioWare-inspired collection of bizarre microgames, riffs on to hilarious, addictive effect. If you’ve never played WarioWare, it’s a rapid-fire parade of tiny, surreal interactive vignettes you play against a strict time limit. And Spookware, which you can download for free right now on Itch (or name your own price if you’re feeling generous), captures the breakneck pace and absurd humour of those games perfectly—but with a keenly observed horror twist.

You control Spookware with the arrow keys. In one microgame, a hand moves rapidly back and forth above a telephone, and you have to hit the down key when you’re directly above it to call for help. In another, a ghoul crawls through a doorway and you have to repeatedly hit each key in a clockwise pattern to turn a valve and bring a shutter slamming down on it. At first, the fast pace is kinda relentless. But you soon adjust to the game’s peculiar rhythm and enter a wide-eyed, trance-like state as you furiously tap the keys against the clock.

The presentation is superb too. It has a scrappy, hand-made, almost zine-like feel, with a touch of Terry Gilliam’s Monty Python animations. This, combined with some delightfully lo-fi music and weird pitched-down voice samples, gives the game a compellingly chaotic energy. I really had to force myself to stop playing to come and write this. It’s also clear the people who made it have a real passion for horror films. It’s a tongue-in-cheek satire of the genre in some ways, but also a joyous celebration of what makes it great.

There are 10 microgames in this version of the game, so you will eventually wear them out. But I was overjoyed to discover that an expanded, fleshed out, paid-for version of the game is being released later this year, sometime in the fall. The Steam page is promising “hundreds of hand-crafted, fast-paced microgames”, which is spooky music to my ears. And there appears to be a story too, about three skeletons going on a scary road trip, which should tie those microgames together nicely. I can’t wait to play this.