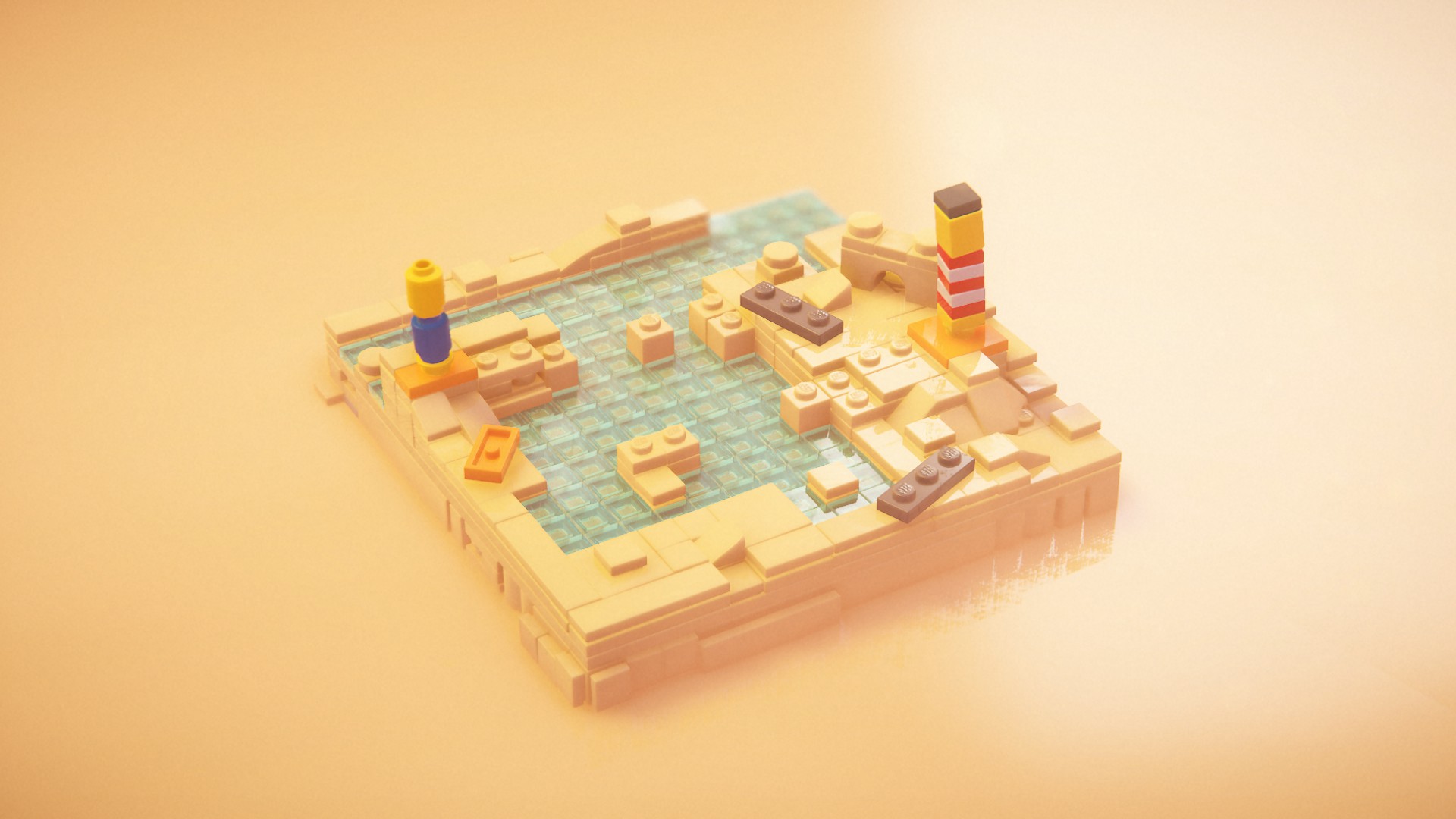 When I was little, I had a huge crate of assorted Lego pieces. New sets were all well and good, but once they’d been built and enjoyed, each in turn was dismantled, its constituent parts destined to become more fuel for the crate. It was a seemingly bottomless well of colourful, constructive opportunity from which entire worlds could spill forth, a single piece uncovered at just the right time bringing life to a brand new idea. Lego has been incorporated into dozens of games over the past two and a half decades, but none of them bring the magic of my crate to life like Lego Builder’s Journey.

Each of the dioramas that make up Lego Builder’s Journey is shaped by a single goal. On one side of each level is a stack of pieces denoting a child, who must cross the minute world in front of them to reunite with their parent on the other side. There is, however, no prescribed solution to any puzzle. In true Lego style, you’re free to use the handful of blocks provided in any way you see fit, as long as you can complete your goal. Establishing a route from A to B is often an iterative process, but it’s one with no fail states or wrong answers. As long as it does what you want it to do, your solution doesn’t need to be elegant or efficient. If the pieces fit together, there’ll be some kind of way forward.

As those pieces come together, they handle in a manner almost as satisfying as the real thing. Simplistic controls let you snap blocks into place. Piles of bricks rattle as you comb through them looking for exactly the right one, and flit seamlessly through different positions as you rotate them into place. It’s an amazingly tactile experience, especially when you consider the level of detail on offer in each diorama, all of which are created entirely from pieces you might find in a set you’ve picked off the toy store shelf. Characters move by hopping from block to block, as they might at the hands of a real person, with the attention paid to every brick, shadow, and ray of light only building that realism further.

Even the story, a simple but enjoyable narrative of parental responsibility and childish imagination, speaks to what Lego has always attempted to invoke. For the greying parent figure, play gets pushed aside for the monotony of work, while for the child, the wonders of the natural world make way for the wonders of their imagination. A robot cobbled together from basement parts comes to life, turning the browns and greens of dioramas inspired by hiking trails and remote campsites into the vibrant primary colours of children’s television. Even those themes, however, are threatened, twisted into a vignette of a classroom that draws uncomfortable parallels to the grind of the parent’s factory job. A healthy dose of slapstick and childish naivety ensure Lego Builder’s Journey never deviates too far from its toybox origins, but the dark, industrial nature of later levels ensures that its more serious ideas land.

While other Lego games have leaned with increasing regularity on the humour and bombast offered by enormous, child-friendly licenses, Light Brick Studios focuses on what it’s actually like to play with those little coloured blocks. It’s a subtle approach, but one that obfuscates the game’s limited scope, and manages to capture everything from the imaginative freedom that Lego offers to the feeling of handling each individual brick.

Across the 35 levels that made up the original mobile version of Lego Builder’s Journey, both narrative and puzzles gently twist and turn, picking up new ideas and dropping them again, all within the format of the brick-based dioramas. Throughout the earlier stages, the game’s sandbox style persists, with the few levels in which there’s a more defined solution often trying to highlight a specific theme. The guiding hand through the game’s different ideas is subtle, which when coupled with camera controls that limit your ability to take in a diorama from all sides can lead to the occasional issue with transparency. The difficulty curve remains steady throughout, often relying on the complexity of the bricks you use rather than the puzzles themselves when it ramps up. When the original finale does arrive, it’s an excellent capstone to story, theme, and design.

Unfortunately, the levels that come after maintain very little sense of that gentle progression. In a series of levels added for the PC version, a significant new approach is introduced. Rather than use complete bricks, these puzzles allow you to stitch together fragments or duplicate the blocks you’ve already made, adding an unwelcoming extra element of experimentation. Newly-implemented fail states are punishing and monotonous—in one instance a three-strikes approach wipes your progress and only takes you back to the diorama once you’ve completed a repetitive task. The increased complexity aligns with a far less transparent approach and a far less defined building system. The charm remains—the levels inspired by the imaginative, colourful dioramas from earlier on—and the dioramas themselves are as pretty and detailed as any of their predecessors, but it’s hard to think of these less enjoyable levels as anything but unnecessary padding in an otherwise expertly-crafted game.

Within the beautiful environments and open-ended approach to puzzle solving, Lego Builder’s Journey is perhaps the most authentic, earnest Lego game there’s ever been, capturing every joyful aspect of its source material. From the sense of freedom that a pile of bricks offers right down to the individual bricks between your fingers, Lego Builder’s Journey manages to recreate not just what Lego is, but what it can be. The attempt to build on its finely sculpted first half is unfortunately clumsy, sacrificing much of the gentle, open-ended approach that makes it so successful, but the way in which it captures with such care and attention something so beloved through its physicality and tactility, even in this virtual format, makes this a very special game.