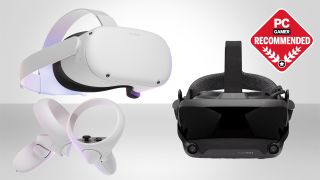 The best VR headset doesn’t necessarily need to be the most powerful device in the world. Above all, if you’re strapping a piece of tech to your cranium, it has to be well-designed, comfortable and convenient. One of the biggest drawbacks to virtual reality gaming today, has been it’s necessity to take up heaps of your time before you even get a chance to play any games.

But with the advent of improved inside-out tracking, the best VR headsets are starting to rid us of the need for external tracking sensors to be placed around the room, and re-calibrated every time you want to game. VR gaming never used to be a quick setup for a short gaming session, but now it can be.

The best VR headset then is an investment in pure escapism and not just an awkward novelty. It’s also your only route to Half-Life: Alyx and much, much more. Though, admittedly, that stunning Half-Life sequel is almost worth the entry price alone. But once you’ve scoured the streets of City 17 for Combine to kill, and Headcrab zombies to avoid, you can sit back and watch a movie writ large on a virtual cinema screen, fly an X-Wing in Star Wars: Squadrons, or even paint a physics-bending mural in a virtual space.

So, forget the naysayers, it’s a great time to get into virtual reality.

The Oculus Quest 2 both improves on the specs sheet of the original Quest and delivers it for cheaper. With a new LCD at 1832 x 1920 per eye, the Quest 2 offers exceptional clarity for an entry-level headset, through which you can enjoy a slew of games either purpose-built for the standalone headset, and thus rendered by the onboard Snapdragon XR2 chip, or beamed from your PC using Oculus Link and a compatible USB Type-C cable.

Thanks to Oculus Link, the Quest 2 becomes more than a standalone VR headset. It becomes an all-in-one VR Swiss army knife, capable of great on-the-move VR and gaming across SteamVR and Oculus Rift compatible titles. It’s now capable of up to 90Hz refresh rate, thanks to a recent update, making it an even sweeter deal. There’s even an update on the way that offers up support for 120Hz in some games, which is pretty incredible.

The Quest 2 is also one of the quickest headsets to setup on this list. With Inside-Out tracking and hand tracking built-in, you can go from unboxing to up-and-running in VR in just a couple of minutes.

There’s only one hitch in the Oculus Quest 2’s plan for virtual world domination: compulsory Facebook account login. The Oculus Quest 2 requires a Facebook account. The company says it’s to better serve you, the customer, with services and products, although for a good while there the only discernible ‘benefit’ was direct to feed screenshots. Not great. If you’re not a fan of Facebook’s practices then you’d best scroll further down the list for a VR headset worth investing in, starting with Gabe’s superb…

The Valve Index boasts some of the best visuals of any mainstream, commercially available HMD, with a display resolution equaling the Vive Pro, Quest, and Odyssey+ but paired with a 120Hz refresh rate (up to 144Hz in a currently unsupported, experimental mode). The FOV, at 130°, is also best-in-class, and there’s virtually no detectable screen door effect inside the headset.

It also boasts some impressive technology and handy convenience features, like per-finger tracking on the excellent Index controllers, USB passthrough for future accessories, and fantastic, crystal clear audio via the near-field speakers, which hover just off the ears. It’s also comfortable to wear, built from carefully selected, high-quality materials and top-notch weight distribution.

But all that comes at a price. It’s the best VR headset on the market… if you don’t consider the value proposition. At nearly a thousand dollars, the complete Index package costs more than double the Rift S or Quest price and almost precisely double the MSRP of the Odyssey+, which can be regularly found at a discount. There aren’t many solid use cases for the finger tracking technology either, apart from Half-Life: Alyx, which you get for free.

It’s nearly time we say goodbye to the Oculus Rift S. According to Facebook, it will no longer be replenished at retailers, so what stock they have is it from here on out.