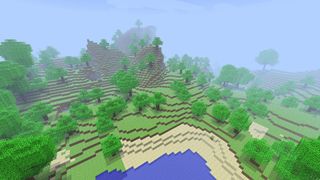 Back in September 2010, a woman named Luna downloaded the latest version of an indie game, an alpha called Minecraft to her laptop.  She was excited, so she tweeted about it: “oooooohhhhhhh MineCraft update!” . Who knows if she played it. All we know now is that she downloaded it and didn’t purge her download folder later.

A decade later, Luna made a group of archivists very happy due to one thing: She backed up the user profiles and saved them before she later wiped the laptop. The members of Omniarchive, an internet archivist collective, have been after the short-lived Minecraft Alpha 1.1.1 for a long while now. Alpha 1.1.1 didn’t last long because it had a game-breaking graphics bug. That’s not what matters to the archivists, though: They want everything. Finding Alpha 1.1.1 was a long-running joke inside this Omniarchive community because it was only available for download for a scant three and a half hours. It seemed unlikely that, after years of searching, it would ever turn up.

Then a member found Luna’s September 18, 2010 tweet about the new MineCraft update.

The rest, as they say, is history. Luna dug through a hard drive’s archive folder, to no avail, but checked an old USB external drive. There they were, a stack of archived profiles from her old laptop, and within them she searched and found several files that included a minecraft.jar—kids, yes, Minecraft was once a game made in Java, no, I can’t explain that right now. That .jar file was from September 18, 2010, 21:53 hours local time. One quick trip into the file’s guts later and Luna was pretty sure she’d found 1.1.1, which the Omniarchive community later verified.

“You are literally going to be a legend in this server,” said a commenter in the related Discord server.

Oh, and it turns out that’s not Luna’s only rare build. She also had a .jar of c0.29_01, which the archivists only had as part of a modded download. They’ve got a clean one now, too, all pushed up to archive.org.