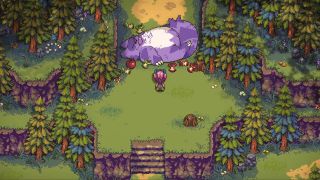 Sun Haven looks like a Stardew Valley clone and to an extent, it is, but this Early Access release promises a bit more structure. Sure, it’s a farming sim: You’ll be planting and harvesting all manner of crops, while also helping the Sun Haven community grow from a backwater into a thriving village. But there’s also a structured narrative that will take you beyond the borders of Sun Haven into other towns, and if you like, the fantasy-style combat can play a big part in how you play the game. It supports eight player multiplayer straight out of the box, and there are seven playable races ranging human through to angels. Since this is an Early Access release, the main questline isn’t quite complete and more features will be added over time, but Pixel Sprout Studios predicts a relatively short six months for all this to be added.

Out of Line is a puzzle-platformer with a painterly art style. Protagonist San is stuck in a dilapidated old factory and needs to escape, which naturally involves encounters with all manner of weird and wonderful mechanical life. The game’s Steam page is unusually thin on information, but the gameplay video above is enough to demonstrate what this is: think Limbo or Inside with a gentler art style.

Here’s another rail-focused tycoon game, with a huge focus on traffic control and optimisation. As the trailer demonstrates, this is a bit different from something like OpenTTD: You’re operating a map-like representation of the networks, and the result is akin to watching a subway map come to life. Last week’s release was an Early Access affair and will stay there until “everything fits just right,” but during that period you can expect new features including shunting and switching, and scripted events, among other stuff.

If you owned a Sega Master System you probably owned Alex Kidd in Miracle World: In some regions it came pre-installed. So there’s a lot of nostalgia for this 8-bit platformer, though it hasn’t aged well to say the least. This modern remake not only looks beautiful but adds a bunch of quality-of-life improvements, including game saves (oooh!), the ability to toggle invincibility (you’ll want it, trust me) as well as new levels and a boss rush mode. You can also toggle between the classic graphics style and the lush modern take, which is a relief, because although the new art is gorgeous there’s a helluva lot of charm to the original.

Here’s a quiet and ruminative game about being a night watcher, ie, someone who watches the night. Specifically, Imaginaria has you watching the Antarctic night, so don’t install this expecting railguns and gibs. Do expect a richly atmospheric experience based on “the developer’s experiences living in Antarctica for 15 months,” with a host of different locations to explore and eerie but calming monochrome pixel-art.

These games were released between June 21 and 28 2021. Some online stores give us a small cut if you buy something through one of our links. Read our affiliate policy for more info. ‌