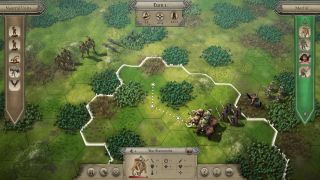 Master of Magic is a really, really rad 4X—at least if you, like me, are part of its cult following. The d evelopers of the new Master of Magic remake, Polish indie studio MuHa Games, have posted the first developer diary going into what they’re keeping, and what they’re changing, from the original. Master of Magic was acquired by publisher Slitherine in 2019, then re-released on Steam alongside its impressive fan-made expansion in early 2020.

The 1994 turn-based 4X is from the early days of PC strategy, but it’s got some truly golden design based on mix-and-matching a fantasy civilization with a custom-made player Wizard. The powerful Wizard then steward’s that civilization’s conquest as they, themselves, attempt to cast the Spell of Mastery which will make them, well, the master of magic.

It looks like nearly everything from that original, core game is coming back for the new Master of Magic. The dev diary includes all the factions and wizards from the first game, as well as the twin game worlds of Arcanus and Myrror, all the way down to the mana system. “Our design philosophy is to attempt to recreate the mechanics and gameplay of MoM as faithfully as we can,” says MuHa Writer & Lead Quest Designer, Mila Undro, in the diary. There might be some small differences, it seems, but not big ones to core unit stats.

The big changes are in the form of the map—moving from squares to hexes—and in quality of life improvements like customizable difficulty settings, tooltips, and autoresolve for tactical combat. There’s also, as you might expect from a remake of a 90s game, a lot of improvements to be done on the game AI. MuHa also intends to add extensive modding tools.

You can find Master of Magic, the remake, on Steam and GOG, and on the MuHa games website. (You can also find the original and its DLC on both Steam and GOG.)