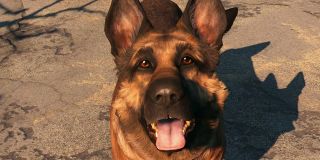 River, the dog which served as both model and inspiration for Fallout 4’s Dogmeat, has died. Developer Joel Burgess, who was River’s owner, announced the death on Twitter and went over River’s impact on Fallout 4’s development as a constant presence for the development team to understand a dog companion. River was also filmed, recorded, and had her behavior watched as a reference for Dogmeat.

In that Twitter thread, Burgess goes deep into detail about how River influenced his desire to have a dog companion in Fallout 4 be more than a weapon, but a true friend to the player. Bringing the personality of a loving, protective, outgoing dog to Fallout 4 was one of Burgess’ design goals for the character, and so River’s looks, movements, but most importantly personality were reflected in the in-game character. Dogmeat’s propensity to bring you large objects, even ones you didn’t want, was based on River.

Likewise, a walk with animator Jean Simonet inspired Dogmeat’s behavior: River would often walk ahead of Burgess, but consistently stop to look back and check on him.

River’s behavior in the game is also based on the behavior of German Shephards, protective dogs who will put themselves between the thing they want to protect and danger. Dogmeat does just that. “This didn’t just give Dogmeat a distinctive combat style from other companion NPCs; it was a character choice,” Burgess said.

It’s never easy to lose a friend, especially when that friend is a constant companion like a dog. Our hearts go out to Joel Burgess, and everyone who knew River. Raise a glass to River’s memory today. As Dogmeat, at least, she can keep bringing people joy (and large sticks) for years to come.