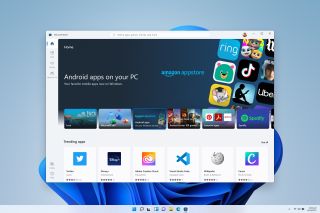 It was announced that Windows 11 will have built-in support for Android apps, and there was much rejoicing. This is good news for anyone who wants to play games like Diablo Immortal on PC without having to download a third-party program full of ads. However, it was also announced that those apps will be available on the Microsoft Store via a partnership with Amazon’s Android app store. What about apps that aren’t on Amazon, or people who would rather not give their money to Jeff Bezos?

Miguel de Icaza, distinguished engineer at Microsoft, has been on Twitter assuring people that apps will run even if they aren’t obtained from Amazon. Android programs are bundled as apk files, and apparently you’ll be able to “bring your own” and sideload them.

So yes, if you’ve got a library of apks from somewhere like itch.io, or are particularly attached to anything from the open-source app library at F-Droid, they’ll run in Windows 11. Here’s everything we know about Windows 11’s release date, pricing, and what it means for games.