Hot News What videogame villain would you like to play&quest; 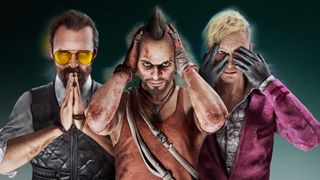 Far Cry 6’s season pass DLC will let you play as three of the series’ big bad guys: Vaas Montenegro from Far Cry 3, Pagan Min from Far Cry 4, and the super boring religious man from Far Cry 5. Imagine the playing field was open to every antagonist in the world of PC gaming. Is there some better bad guys out there you’d rather be?

Sarah James: My initial response to this was going to be the questionably villainous Sylvanas Windrunner. But while it would be cool to play for a time as the Horde’s fallen Warchief, demonstrating badass bow skills and transforming into a banshee at will, you do get to play her in Heroes of the Storm.

So instead I’m going to go with the trolls in Valheim, and more specifically, the ones that raid your base just as your putting the finishing touches on your latest building project. I mean, imagine the smug satisfaction you’d feel as you laid waste to lovingly crafted structures while watching the tiny Vikings run around in a blind panic. Taking out half the trees in the immediate vicinity with one swing of your log would be pretty fun too. Sylvanas would surely approve.

Morgan Park: The MULEs in Death Stranding. The MULEs are some of my favorite videogame enemies in recent memory, mostly because they have zero interest in killing Sam Porter Bridges. They just want the stuff he’s carrying (because they really love stuff or something), and don’t appreciate it when he strolls into their designated territory. I imagine you’d frame it as some sort of base-building game where you scavenge resources by yoinking supplies from unsuspecting porters. Of course, you’d also have to be on guard in case one of those salty porters sneaks in to take back what you stole (or beat the snot out of you and your MULE friends).

If you wanted to be really cruel you’d randomly adjust the BPM by small increments to throw off their timing. That’s some real beat villainy. (I have the strange feeling that I’ve seen something like this, but I can’t place it. In a sci-fi movie? Or maybe I’m just thinking of custom osu! maps? Now I’m remembering that Black Mirror episode where people ride bikes to make electricity, but that isn’t the same at all. Guess this will just bother me for the rest of my life.)

Jody Macgregor: I’d play a game where you’re Shodan, the AI from the System Shock series. I’m imagining a space station management sim where you and the organic hivemind of the Many squabble for space deck-by-deck, with the bodies of the crew as your resources.

You could probably make a lot of great management sims out of playing a bad guy. Imagine being Andrew Ryan building Rapture in an underwater Sim City, or The Master from Fallout experimenting to make Super Mutants by messing around in something like Spore’s creature creator. When you think about it a lot of villains are trying to build or control something and then you, the hero, come along and wreck it. Which I guess is the whole point of Evil Genius.

Christopher Livingston: I’m down with Jody’s idea for evil city building games. Maybe a Death Star Manager where I could be Moff Tarkin in charge of its construction, occasionally dealing with rebel spies and blowing up a planet or two when necessary. Just gotta really check the plans to make sure there aren’t any exposed thermal exhaust ports (right below the main port) that a torpedo could fit through.

I’d also be into City 17 Tycoon where I’m Dr. Breen overseeing the Citadel, subjugating what’s left of the human race, and trying to prevent the city being overrun by pesky rebels and rogue theoretical physicists. All while leaving time for a few motivational broadcasts to welcome all the new citizens. I’d probably mess it all up, but then I could just start over with City 18.

Natalie Clayton: I just want to be a helpless level one goblin.

Zloth: Hmmm…. SHODAN from System Shock could be fun, or the Master Control Program from Tron. Either way, the game would be about taking over the world’s computers, and thus the world itself. (Was the MCP actually ever in a game?)

Krud: Wow, that’s a tough one. Maybe a Deus Ex prequel game as Bob Page? Though I don’t know that I would want to make the same choices as him.

Leave a reply "Hot News What videogame villain would you like to play&quest;" Cancel reply