Hot News Kerbal Space Program creator looks back on leaving it behind: 'The hardest thing I've had to do in my whole life' 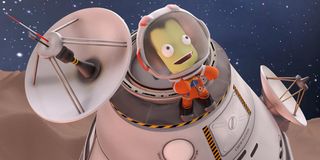 Kerbal Space Program is now 10 years old, but the kerbals themselves—the little green astronauts who add so much charm to the intimidating space simulator—lived in the mind of creator Felipe Falanghe for a decade before he ever started making his dream game. As teenagers, Falanghe and his brother would turn fireworks into cardboard spaceships, strapping on fins and little bits and bobs to give them texture. “At some point we started strapping little tinfoil men that we would make to the little duct tape cockpits, and we called those guys kerbols,” he remembers.

Falanghe can’t remember where the name came from. It just came to them, and over time the pronunciation morphed. Kerbols became kerbals. Eventually he went to college for game design, moved to Mexico, and started working at Squad, a marketing agency that made interactive ad installations that were almost, but not quite, videogames.

Even though he wasn’t building rockets anymore, Falanghe held onto the idea of kerbals, thinking that someday, maybe he could make a game about them.

Kerbal Space Program would eventually succeed beyond his wildest expectations, but that took its toll. After working on it for five years, Falanghe decided he had to quit, letting the game about his childhood toys continue on without him.

“I try to not think about it too much,” he says. “But it was the hardest thing I’ve ever had to do, and seeing it continue to grow without me there is a weird experience. It’s like watching your baby get raised by different parents. You can still be proud of the things that it does, but where did it learn to speak like that?”

If you ever thought that it was strange that a marketing company with no videogames under its belt created one of the most important PC games of the decade, well, you’re not alone—Falanghe thought it was strange, too, and he was the one who worked there. After taking a job at Squad straight out of college, essentially desperate for whatever he could get, Falanghe quickly found the work depressing. He didn’t like advertising, and the nonstop pace of the work was grinding him down. So he walked in one day determined to quit.

“And they said, ‘well, don’t quit. If you stay with us, we’ll let you make your game,’ Falanghe remembers. “So that’s how it went.” He’s still baffled by that decision, but assumes that Squad’s leaders were also tired of the grueling advertising business and thought it was worth trying something new.

The first pitch for Kerbal Space Program was humble: you’d just build a rocket and see how high it could get before crashing back to the ground, then do it again. “I thought, if I’m lucky I’m going to get maybe six months to work on this [before] they pull the plug and I need to start looking for something else. But I fully expected that the project was going to be terminated very quickly.”

He was essentially a solo developer, with one other Squad employee acting as a producer for Kerbal Space Program. Assuming he was working on borrowed time, Falanghe thought it made sense to release Kerbal as quickly as possible, then update it as long as there was interest in the game. This was in 2011, two years before Steam introduced Early Access, but Minecraft had proven it could work.

Because Falanghe didn’t expect Kerbal would survive beyond that first six months, he didn’t have a long-term design goal in mind for a completed game. “There wasn’t so much a design spec as there were ideas for maybe things that I would like to add, if we had the chance.” Eventually that meant having to go back to rewrite much of the game’s code multiple times to support new features and new versions of Unity, but his focus in the beginning was just getting a game out as quickly as possible. “It was more than just my project at stake. It was my job. I felt that it was do or die for that game to work. That was at least how I felt the first year, year and a half.”

After about seven months of work, the first version of KSP was released on June 24, 2011. It was free, and their projection for a successful first month, solely based on word of mouth, was a humble 900 downloads. They got that within a few days. By mid-July, it passed 50,000.

Interest kept growing and Falanghe kept adding to the game, releasing the first paid version in March 2012. It was a surreal time; because he mostly worked from home, Falanghe didn’t have a strong sense of how Kerbal was viewed within Squad—he was more in tune with the game’s community. But the paid version was a hit, and Squad started putting more resources behind the game, hiring members of the community to start working on it. That team of inexperienced developers soon went through some intense growing pains.

“We didn’t know things like QA and test and deployment pipelines that we would eventually learn later on out of the harshest experiences possible,” Falanghe says. “Everything those workflows and methodologies exist to prevent happened to us, and that’s how we learned why they’re there and useful. I remember the first builds I’d pack manually into a zip file and upload via FTP manually and just hope it was better than the previous one. There wasn’t much of a way to keep track of builds or bugs people would report, so I’d just make another version and people would complain to various degrees of volume and I’d try to piece together what was wrong with it… it was a very rough process, in the early days.”

Falanghe had once assumed Kerbal Space Program (and his job) were doomed to survive only a few months. Five years later, he would leave Squad because its success made it clear he would have little chance of getting a second game off the ground.

Expanding the Kerbal team was stressful for Falanghe, who had no experience leading a project. Suddenly there were ideas to compete with his own plans for where Kerbal should go. But that was ultimately a positive—all the community members-turned-developers were as passionate about Kerbal as he was, so even without a rigid design plan, it grew organically. The way people played the game was a constant source of surprise and inspiration, and the community was constantly asking for more realism in the simulation.

Leave a reply "Hot News Kerbal Space Program creator looks back on leaving it behind: 'The hardest thing I've had to do in my whole life'" Cancel reply

Related Post "Hot News Kerbal Space Program creator looks back on leaving it behind: 'The hardest thing I've had to do in my whole life'"