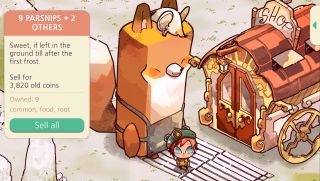 Localising a game doesn’t just mean translation—it often means changing content that makes sense in one culture so it’ll fit another. So, when tasked with adapting cutesy Animal Crossing-like Cozy Grove for a Spanish audience, the localisers at Native Prime decided to spare players the stress of thinking about how messed up American healthcare has become.

In Cozy Grove, you’re tasked with making friends after being stranded on an island full of ghosts. Making friends is important, as one of your spectral neighbours notes, saying: “What if you get sick and need to crowdfund your appendectomy?!”

This tracks if you’re American, or at least aware enough of the USA’s profoundly broken healthcare system that one third of GoFundMe campaigns were used to cover medical costs in 2019. It’s darkly comic to a home audience, but in other languages, it might just read as a bit sad.

“If a Spanish player read, ‘I need friends to pay for my appendectomy,’ they would probably not laugh, they’d be like, ‘Why would I want friends to pay for that?’,” said Native Prime project manager Isa Gutiérrez in a Tweet. “That’s why we used a more relatable situation for the Spanish public.”

Instead, Native Prime chose to use a much less harrowing example in their translation—asking for help in moving a sofa. Less cutting, perhaps, but Gutiérrez explains that localisation is about making sure a work lands the same in all regions, more so than preserving the original game’s words verbatim.

“The point of game localization is not just to translate what is said nor ‘erase’ parts of other cultures, but to make players from all countries react the same way a U.S. player would, which in this case is to make them laugh.”

It seems to have landed well enough for Cozy Grove co-writer Kris Ligman, who joked: “The utter hilarity of this game’s references to bleak American dystopia being so unrelatable to a European audience that they had to make the famous “crowdfund your appendectomy” line into being about helping a friend move their couch instead.”