Hot News The best deals in the Steam Summer Sale 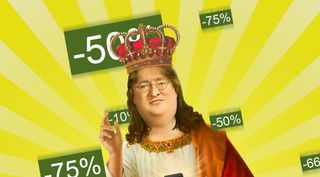 Like a cool glass of water sent from the heavens to revive our parched lips, the Steam Summer Sale is here. (Please, ignore all the cold water in our backlog. We’re not in the mood for that water.) With thousands of games on sale, it can be pretty overwhelming to find what you’re looking for, so take a breather and let us do some heavy lifting for you.

Disco Elysium – The Final Cut | $26 / £23 (35% off)
One of our favorite RPGs of all time has more music, more quests, and comes fully voiced now. It was already a steal, but this is a super steal. A deal so good the voices in your head won’t shut up about it.

Evil Genius 2 | $30 / £26 (25% off)
Being the bad guy rules, and Evil Genius 2 indulges in the lifestyle in what basically plays like a stylish beehive simulator. We dug it at review time, citing some problems with bloat, but a couple patches since have chipped away at some of the more time-intensive stuff.

Outriders | $39 / £32 (35% off)
It’s a looter shooter that ends, a blessing in this, the time of live service dominance. We also dig Outrider’s interesting build potential, and how all that gear basically turns it into an anti-cover shooter over time. Play it with some buds, if you can.

Resident Evil 3 | $20 / £16 (67% off)
It’s a straightforward shooter that doesn’t quite do the original justice, but RE3 is still a pretty damn fun action game. A $20 price is a better fit for most expectations.

Hunt: Showdown | $20 / £18 (50% off)
Hunt is a sensual, punitive nightmare FPS and still one of the best-looking games on PC that just keeps getting better. New monsters, new ways to play, and a big new map are here or on the way, so now’s a great time to try out a competitive shooter where simply surviving a match can feel as good as taking first.

American Truck Simulator + Euro Truck Simulator | $10 / £7.50 (75% off)
Somehow two of the most detailed, stressful sims and simultaneously the most relaxing, meditative games are trucking games. Tour Europe or America for $5 each, but you really oughta go in on both. Open up your heart to trucking.

Warhammer: Vermintide 2 | $7.50 / £price (75% off)
Kill legions of rats as grimdark fantasy characters. One of the best attempts at doing a Left 4 Dead that stands on its own.

Tabletop Simulator | $9.99 / £7.49 (50% off)
Play board games, D&D, a modded version of Gwent, and lots, with the wonderful option to flip the table over if you feel a bit of rage coming on. It even supports VR now. A great way to play all sorts of games with friends.

Oxygen Not Included | $9.99/ £7.59 (60% off)
Klei’s colony sim about managing a collection of clones trapped inside an asteroid is both deeply complex and easy to dive into. It’s cute, it’s challenging, and once you’ve started it’s hard to stop.

Blasphemous | $8.50 / £price (66% off)
Probably the second best 2D Souls-like (it’ll take a lot to beat Hollow Knight), Blasphemous is full of grotesque, detailed pixel art that imagines Catholicism as horror, or at least scarier than it already is. Layer in some challenging platforming, rad boss fights, and a lotta blood and it’s an easy buy for under $10.