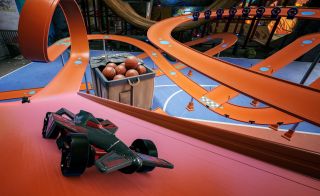 Games like Hot Wheels Unleashed were abundant in PC gaming’s beige era. You’d pop a PC Gamer demo disc into your Voodoo 2 tower of wonders and find games such as Airfix Dogfighter and ReVolt, which concerned themselves with toys coming to life, somehow, and deciding to race across suburban bedrooms and garages. They were never going to hold your attention like Richard Burns Rally, but it was an afternoon or two of giggles, wasn’t it?

And then the mid-budget games market collapsed and we all cried into our hands, because there would be no more of such humble tomfoolery. Or would there?

Enter Milestone’s unabashedly straightforward Hot Wheels racer. Once again a magical and unknown force has imbued collectible toys with sentience—and also rather thoughtfully arranged a number of tracks around college campuses and skateparks—and your mission is to race one of those toys to victory.

The full release will include a track builder and 12-player online multiplayer, according to the developer, but simple quick races were the main event in the preview build I played. They walk a line between the kind of exuberant loop-de-looping you’d expect from the official toy license it carries and a sterner, more straight-laced style. It’s Trackmania without the restarts. Mario Kart, but with straight-line braking. A world of gravity-defying tracks that imply arcade forgivingness and then chuck you miles from the circuit.

It’s a bit frustrating, because after several hours of racing, I’m still not sure what Hot Wheels Unleashed wants from me. Is it a game about powersliding around every corner, or about learning the tracks and finding braking points?

All tracks offer acceleration strips: blue spots that charge your boost, and pink spots that boost you instantly. On paper, there’s an advantage to weaving lines that take you through as many of these as possible, but often those boosts fling you at disadvantageous trajectories towards the next section of track.

The most effective way to approach a race, then, is to know its undulations and traps before the green light and tip-toe around them, coasting through some corners, powersliding very rarely, and boosting only when you’re damn sure the track’s straight for the next five seconds. Doing that isn’t unsatisfying, it’s just a different vibe than the pedal-to-the-diecast-metal trailer implies.

Ostensibly, different circuits focus on different disciplines, like drifting or navigating environmental hazards such as the confounded spider that spat its web at me at point blank range on the final lap and cost me 11 positions. But after a few races, the distinction becomes unclear and it feels like opportunities have been missed to add character to locations and layouts.

By far the best thing about the build we were sent is the variety of vehicles, and the love lavished on each of them. Milestone really nails the cuteness of its miniatures, the sparkle of their various paint jobs, and even the scratches across their bodies, as if they’ve been mauled by virtual middle schoolers.

They also handle wildly differently. There are a couple of different boost styles—a series of bursts or a long continuous release—and some cars offer a button-bashing minigame on the starting grid to nail a quick start. This being the modern era, cars are arranged into color-coded rarity tiers and I expect the acquisition of top-tier vehicles will account for much of the long game draw.

The variation in their handling is also a factor in why I haven’t yet sussed this game’s handling. The Hot Wheels High school bus and Night Shifter hot rod require completely different touches to convince them round corners, much to the game’s credit, and as compelling as the car collection element is, success looks like it’ll be earned by spending time with one vehicle and figuring out its behaviour.

Like the demo disc delights of yesteryear, it’s unlikely Hot Wheels Unleashed will keep its hooks in us for months, but what it does look eminently capable of is a quick fix thrill. There’s a lot to be said for uncomplicated racing you can access a few seconds after hitting ‘Play’ on Steam in the games-as-a-service age, and the toy car collection element may add to the long term draw.