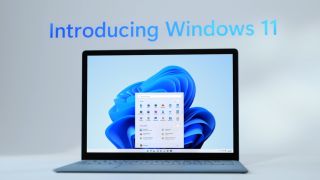 After a leaky couple of weeks, Microsoft has finally announced Windows 11 at pre-show media warm up for the ‘What’s Next for Windows’ event. The new version of its Windows operating system is promising a huge overhaul of its UI, as well as a bunch of under-the-hood enhancements to make all our lives more worthwhile. That’s what a good OS does, right?

Microsoft says that Windows 11 will be released by the holidays at the end of this year, but there will be beta access for Windows Insiders to various builds ahead of the final release starting next week.

Of course an early build of Windows 11 has already leaked, and that means many enthusiasts have already been sneakily getting to grips with the intricacies of the new OS via nefarious, unsanctioned means. But Frank Shaw of Microsoft has discounted “that incomplete build some people were playing with last week” as not the real deal for Windows 11.

UI changes aside, one of the most interesting parts of Windows 11, especially for us nerdy PC gamers, is that its hardware scheduler is rumoured to have been tuned for Intel’s new Alder Lake range of processors also launching this year. We’re hoping that Windows 11 will be available—with the inevitable bugs ironed out—by the time Alder Lake gets released, or it could be a struggle for Intel’s new chips.