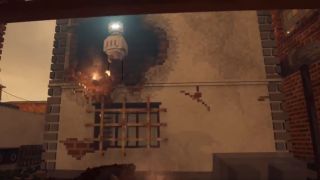 Teardown is a smashing good time, a shockingly smart heist game framed by some proper impressive voxel destruction tech. But for all the hours I’ve put into planning capers and tearing down its brittle maps, I’ve never once thought the experience could be improved via relentless pursuit from a tireless, fearless, unstoppable Terminator.

Sadly, developer Dennis Gustafsson does. And from the looks of recent tweets, it seems I’ll never be able to play Teardown again.

Teardown has had pursuers before, mind. The game’s heist missions often pit you against a heavily armed attack helicopter, chasing down your every move with spotlights, miniguns and rockets. But these predatory birds can be evaded and distracted, thrown off course.

What’s terrifying about this robot is the way it simply will not stop. You can destroy floors, barricade walls and collapse catwalks, and it’ll still keep coming—its spotlight CRT head casting a sickening light across the map.

Thank god it’s not armed. Yet.

Granted, this robot is only slightly less horrifying than the giant spiders Gustafsson used in early development videos. Initially developed for a prototype, players figured out how to access them in the live game last year, turning Teardown into an arachnophobe’s worst nightmare before the developer promptly removed them.

Gustaffson hasn’t properly announced when or how these ‘bots will arrive in Teardown. But they will be fully exposed to lua scripting, ideally letting you reprogram for any purpose you see fit. With Teardown already fostering a healthy mod scene, I’m quietly excited (and very scared) by the possibilities afforded by these mechanical pursuers.