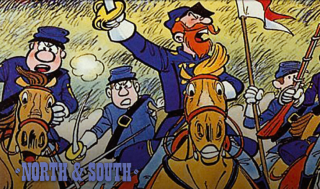 As part of its annual summer sale, GOG is having a bit of a retro splash and living up to the store’s name. The big news for anyone who remembers early ’90s gaming mags is the return of North & South (20%), alongside its relatively recent sprucing up as The Bluecoats: North & South (50% off). This is a classic strategy title based around the American Civil War, where one of the selling points at the time was you could play as either side.

These are accompanied by a bunch of other titles whose names inspire a bit of wistful longing for the good old days. The First Samurai and the Second Samurai are basically platformers ‘heavily inspired’ by the likes of Shinobi and The Last Ninja but, among the many examples of such games, these were good ones: they’re being flogged as a bundle with 15% off

More surprising is Data East’s Night Slashers, an early 90s arcade brawler in the Final Fight mould that’s really quite good, if I recall correctly, and is a third off. Data East’s Wizard Fire also makes an appearance, an arcade game well worth looking up for any fans of Solstice.

Other titles include tile-puzzler Breakthru, caveman platforming sequel Joe and Mac Returns, and the genuine if long-in-the-tooth classic Saboteur. No, not that underrated 2009 EA game, but a 1985 Spectrum title. Don’t all rush at once, I know, but back in the day this was a genuine belter. The first two games, and a more recent third, are now on GOG and have 10% off over the sale period.

Confusingly, the discounts all end at different times between 29th June and 4th July, so if any of the above pique your interest then it might be better checking sooner than later.

Titles due to be added in the near future to GOG also include The Links series (The Challenge of Golf, 386 Pro and LS: 1998 Edition), and Fighter’s History, another Data East fighting series. On top of that, last week saw the arrival of other retro titles including the Space Empires Complete Pack, Street Racer and Mashed.