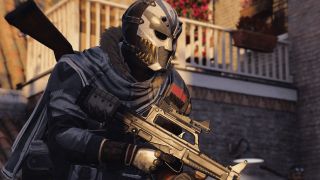 If you’re shooting for the best C58 Warzone loadout, then you’re in the right place. Warzone Season 4 introduced the C58 assault rifle, and once you rank your battle pass up to level 31, you can give it a shot, too. It’s fun, and feels pretty damn good, especially when you deck it out nicely.

The C58 is a reliable gun at range, but it’s got the versatility to be strong in all situations with the right attachment combos. I particularly enjoy the following loadouts, the first as a strong balanced AR used like the M4A1, and the second more like a lightweight AK47.

It’s one of those guns that shouldn’t feel as good as it does, but in the right hands and a good bit of game sense it can bring you a big wedge of Warzone victories. So, here are the best Warzone C58 loadouts.

The C58 with these attachments is a finely-balanced weapon for all situations. You’ll usually be able to land seven-shot kills consistently with a few hits anywhere on the torso, and that’s on a fully-armoured enemy. The Suppressor is used on this loadout for this reason: You have a seven-shot kill at almost all ranges, so there’s less reason to slow your aim-down-sight speed with the Agency Suppressor.

The recoil on the C58 is surprisingly friendly, too, particularly at medium ranges, with some manageable vertical jumping to deal with along with a teeny bit of horizontal bounce that’ll become easier to handle with time. This is especially true with the 18.5” Task Force barrel, which reduces recoil and boost bullet velocity. It’s worth the gun grind, trust me. If you’re still waiting to get that unlock, swap it for the Takedown barrel.

As is often the case in Warzone, you want a big ol’ magazine to maximise your potential damage against whole squads. The STANAG 55 Rnd mag does the job here, and even lasts longer than you’d expect thanks to the C58’s relatively slow fire rate. As long as you hit your shots, you’ll have a lovely time with this version of the C58. It’s so versatile that you can run it safely with Ghost as your second perk and have an AMP 63 as a sidearm for emergencies. This lets you stay off the map and ruin your enemies at all kinds of ranges.

Of course, there are guns that’ll beat the C58 in pure damage at most ranges, but this loadout is perfect when combined with good game sense and an itchy trigger finger.