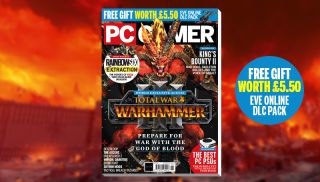 Once more unto the breach, dear readers, once more! A massive new issue of PC Gamer has formed up along the walls of your local newsagent, reviews glittering in the sunshine, features fluttering in the breeze. At the head of this glorious word army stands the mighty Total War: Warhammer III. We dispatched envoys to Creative Assembly to parley about the series’ advance into the Realms of Chaos, and to learn the secrets behind the game’s new units, which include giant bears.

Protecting the flanks of our cover story are two brave and noble features. On the right flank, the mighty warriors of the world’s first all-female videogame tournament speak to us about making history. On the left, the co-op shooter Rainbow Six Extraction (formerly known as Quarantine) stands stalwart against a vicious new alien foe.

Guarding the western wall is a band of fresh, eager previews, including Arkane’s dazzling action game Deathloop, one of our most anticipated games of the year. Also preparing for action are the cyberpunk shooter The Ascent, his Royal Highness King’s Bounty II, and the magical arm of the law in Tactical Breach Wizards. These keen recruits are reinforced by a trio of journeyman Early Access games, The Hand of Merlin, Unexplored 2, and the planet-hopping factory management sim Dyson Sphere Program.

Along the eastern wall stands our elite squad of reviews, led by the enormous open world extravaganza Biomutant. Filling out the ranks are Warhammer Age of Sigmar: Storm Ground, Days Gone, Subnautica: Below Zero, and Mass Effect: Legendary Edition. Hammering away in the forge, meanwhile, the Hardware Section puts a brace of PSUs, the beating heart of any gaming PC, to the test.

In the rear-guard of Extra Life, our own Steven Messner takes a nostalgic journey through Lord of the Rings Online, while we catch up with Hardware: Shipbreaker’s chrome-plated story update. Alex Spencer continues his randomised killing spree in Dishonored 2, and Andy Kelly waxes lyrical about Mass Effect’s Citadel.

Coming at you via trebuchet is this month’s free gift, a starter pack for CCP’s Space MMO EVE Online. The pack includes a pair of SOE expeditionary suits, four snazzy ship skins, 10 Plex, which you can trade for a wodge of in-game currency, and seven days’ Omega, providing benefits such as double training speed and access to larger spacefaring vessels.

Issue 359 is formed up on shelves now and ready for battle on all your digital devices from the App Store and Zinio. You can also order directly from Magazines Direct or purchase a subscription to save yourself some cash, receive monthly deliveries, and marvel at our exclusive subscriber covers.

On the subject of which, this month’s exclusive subscriber cover features the ferocious demon Skarbrand, looking his usual incandescent self. Have a gander below at the mag’s fearsome new tabard: