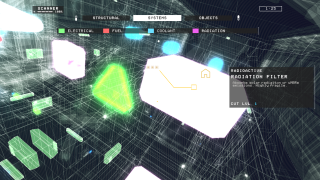 Crushed. Frozen. Suffocated. Exploded. Taking apart the hulking derelicts of Hardspace: Shipbreaker is already a tough gig. But now, the developer has slapped a radiation warning on the zero-gravity scrapyard sim with this week’s new update.

Certain Hardspace ships now come equipped with Radiation Filters that, fittingly, will start seeping dangerous radio waves when dislodged. This will naturally start to slowly sap your health on exposure, but curiously, these emissions will also affect the rest of the ship—causing nearby materials to decay and weaken.

Radioactive materials are also flammable, so take extra special care around fuel lines and engine cores. This week’s update also touches up the UI in your habitat hub, making things clearer ahead of a total rework later on.

It’s a small, neat update coming on the tail of a much larger overhaul last month that gave Hardspace the beginnings of a fully voiced campaign. The last year has also seen Blackbird steadily add new ships (some of them haunted) to the game’s lineup of knackered wrecks. But the core of the game, peeling a starship apart like a billion-dollar onion, remains as satisfying as ever.

Just remember to pack a Geiger counter on your next shift, eh?