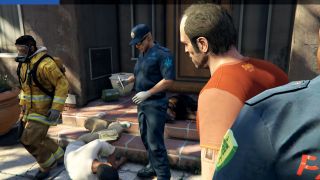 When I last grappled with Grand Theft Auto V’s Chaos Mod, which throws random events into the game like a rogue barista pouring hot sauce and spider eggs into your skinny caramel latte, Michael had just been teleported into Los Santos’ military base. As you can imagine, the famously congenial US Military doesn’t take too kindly to a murderous middle-aged thief appearing in their top-secret compound (at least, not one who isn’t wearing his uniform, oh-ho!) and soon the base is lit up like 17th century London after a certain baker left a certain oven on.

A solid cliffhanger, if I say so myself, neatly set-up for me to begin this entry with a daring escape from one of Los Santos’ most secure locations. It would be a shame if, say, Michael got annihilated the moment a khaki-clad army type came into view. Good thing this isn’t exactly what happened, then! Ahaha. Aha. Ugh.

Emerging from the hospital after his massive lead overdose, Michael drives across town for a rendezvous with his FIB handler Dave Norton. Furious that Michael has leapt back into the armed robbery game (placing his cover story and Dave’s career in jeopardy) Norton opts to turn the situation to his advantage, tasking Michael with sneaking into a hospital to identify whether a body there belongs to an FIB source. This requires Michael to appear dead, which Dave carefully arranges by clubbing Michael in the back of the head.

Now back in hospital again, Michael leaps out of a body-bag and commences his search for the errant corpse. For some reason the morgue is guarded, and while I manage to knock out the first guard and steal his pistol, the second spots me and begins to shoot. Naturally, I shoot back, whereupon Michael clips through the floor and plummets into the grey abyss beneath Los Santos.

At this point, I expect one of two things to happen, either Michael will fall forever, or he’ll die and the mission will restart. Instead, somehow Michael respawns outside the hospital. In theory, this means I can continue the mission, but I can’t see a way back inside. Frustrated, I take a potshot at a passing car. Next thing I know, I’m inside the car. I see what’s going on here. The Chaos Mod is making me teleport to the end location of any bullet I fire. I use this ability to access the hospital rooftop, where the objective icon is. There’s no entrance here either, but I don’t have to work the problem any further, as a UFO spawns right where Michael stands and kills him dead.

Respawning back in the morgue, I now attempt to escape the hospital in the specific manner GTA V wants me to. But the teleportation effect makes combat next to impossible, as each bullet fired exposes Michael to enemy gunfire, traps him in the game geometry, or simply catapults him out of the world entirely. I fight in vain until the effect expires, whereupon the Chaos Mod turns all the NPCs into spinning ragdoll horrors and I’m able to complete the mission with minimal obstruction.

Returning home, Michael treats himself to some well-earned TV time. But a confrontation with his wife leads him into an impromptu yoga session with Amanda and her guru Fabien. The yoga mission is one of the worst examples of GTA V’s restrictive attitude toward progression. It would be entirely in-character for Michael to be rubbish at yoga because he’s an overweight late-40s layabout. But no, Michael failing at yoga also fails the mission, because GTA V is so obsessed with its own narrative grandeur it leaves no room for player agency.

Luckily, the Chaos Mod comes to the rescue. I’m not entirely sure what it does, but the result is that both Amanda and Fabien run off, while a bunch of random NPCs wander into Michael’s back yard and begin hurling profanities at him. “You fucking shit!” a man yells as Michael’s struggles with the ‘Warrior II’ pose. “Why don’t you blow me?” spits a scarfed ginger fellow as Michael attempts the ‘Dancer’. “Eat my ass!” growls a woman as Michael assumes the plank, his calming exercises now accompanied by the sound of distant explosions.

After the world’s least relaxing yoga session, Michael accompanies his son Jimmy to buy drugs. Sampling their purchase together, the mandatory ‘trip sequence’ ensues, with Michael flying in his underwear over a rainbow-coloured Los Santos. When Michael returns to Earth, not only has Jimmy stolen his car, but Michael is also half his normal size. Initially I mistake it for part of the sequence, as Michael rides an inexplicably massive bicycle home. But it transpires the Chaos Mod has shrunk all the NPCs in the game, demonstrated by a hilarious meeting between Michael, Dave Norton, and two other FIB agents, who trade insults and cutting remarks with one another in Munchkin voices.

The Lollipop Guild tasks Michael with a mission to extract an informant from his interrogation by the IAA. I look forward to seeing how the Chaos Mod is going to improve/ruin it. But it passes without incident, as do the next few missions.

This is a growing problem. There’s still much of the Chaos Mod I haven’t seen, but because the effects are random, with every new one I see, the chance of the next being a repeat increases. It’s still capable of delivering absurd scenarios, highlighted by a cutscene outside Franklin’s home where the house suddenly explodes, instantly killing Franklin’s Aunt, his friend Lamar, and his dog. Not only does the cutscene continue, with Franklin now arguing with three corpses, but both the fire-brigade and the ambulance service turn up, bumbling through the cutscene like stage technicians who forgot to wear black. But it’s an island of daftness in an ocean of either uninteresting effects or stuff I’ve seen before. I’m beginning to fear the Chaos Mod is running out of steam.

Later, a new mission gives me an idea. While he waits around for Michael to put together another heist, Franklin has taken up a spot of hired murder for the group’s fixer Lester. In the mission, Franklin has to assassinate four jurors involved in a case with Redwood Cigarettes. But there’s a twist. He only has eight minutes to kill them.

This seems like prime Chaos Mod territory, but on the current settings, I’ll only see one or two effects within those eight minutes, while there’s a good chance I’ll have seen them before. So I head into the Chaos Mod’s settings and reduce the interval between effects from five minutes to thirty seconds. That should sort things out. Boy, did it.

The Chaos Mod first uses its newfound power to deploy a helicopter to attack Franklin while he races to the first target. It looks like Franklin’s career as a hitman will be short-lived, when the helicopter is obliterated by the next effect—doomsday. Franklin’s car is tossed about like an empty crisp packet in a hurricane, and it’s only through a last minute leap from the driver’s seat that he isn’t blown up.

Armageddon dies down as quickly as it had started, while Franklin commandeers another car. He races to Vespucci beach where the first target is located, leaps out of the car and starts shooting… without me pressing the left mouse button. Yep, the Chaos Mod has set my weapons to fire constantly. If there’s one thing that marks out a skilled assassin, it’s wild, indiscriminate gunfire.