Hot News How to make a lightning rod in Minecraft 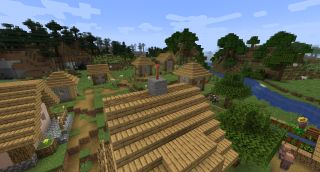 Want to know how to craft a Minecraft lightning rod? The Minecraftt Caves & Cliffs update is set to overhaul the underground world of Mojang’s blocky sandbox later this year, and the first part of that update has added many new materials. One of those is Minecraft copper, which is pretty handy, as that’s exactly what you’ll need to craft a lightning rod.

Thankfully, it’s simple. The trickiest part is locating the copper, though you should be able to find it easily enough: Look for stone or deepslate blocks underground with green and orange flecks, as per the image above.

Once you’ve collected the copper, smelt it into ingots using a furnace—a Minecraft blast furnace will do it even faster. Now, take three copper ingots and place them in a vertical line in the middle of your crafting table and you’re all set.

Lighting rods can be placed on top of flammable structures to absorb any direct lightning strikes that may otherwise do damage to your base. And while it’s unlikely your entire house would burn down because of a lightning strike (the accompanying rain usually puts out any fires that might start), it’s better to be safe. But the lightning rod has another, much more interesting function.