Hot News Seagate enlisted EK to build a heatsink for its FireCuda 530 SSD with 7.3GB/s reads 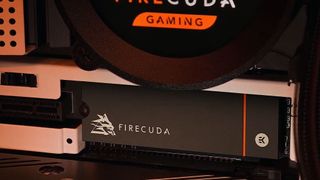 Seagate’s excitement over its new FireCuda 530 SSD is contagious. Unveiled during SG21, the company’s inaugural virtual gaming event, there is more to its latest SSD addition than just incredibly fast rated read and write speeds. There is also a collaborative effort with liquid cooling specialist EK at play here.

From a raw performance standpoint, if the FireCuda 530 comes even close to those rated metrics, it would solidify itself as one of the fastest, and perhaps best PCIe 4.0 SSDs for gaming, especially as developers begin to tap into Microsoft’s DirectStorage API to make better use of speedier drives.

Not surprisingly, the engine driving the FireCuda 530 is Phison’s E18 controller. Its latest-gen controller has pushed PCIe 4.0 SSDs to new heights, to the point where we are close to saturating the bus these drives operate on. The eight-channel controller itself is capable of up to 7,400MB/s of read performance, whereas the theoretical upper limit of PCIe 4.0 x4 is around 8,000MB/s.

Seagate intends to offer the FireCuda 530 with or without an anodized aluminum heatsink developed by EK, a widely known player in the custom liquid cooling scene.

“We had an exciting challenge to design a custom heatsink with the objective of having both form and function—a product that was low profile for tighter builds but also provided thermal management, while maintaining the sleek design that both Seagate’s FireCuda line and EKWB are known for,” said Kat Silberstein, CEO at EK. “The open, collaborative spirit of Seagate and EK is what has allowed the FireCuda 530 to really sing.”

According to EK and Seagate, the anodization process creates micro-pores for additional cooling. It’s a 30g chunk of aluminum (finely textured) with self-adhesive thermal pads with a low profile design to fit into tight spaces. We have not tested the FireCuda 530 as yet, but in theory, the heatsink should help it avoid throttling for a longer period of time.

As for drive endurance, the 4TB model is rated to withstand up to 5,100 terabytes written (TBW). Or as Seagate puts it, you could write to 70% of the drive’s capacity every day for five years (which is the length of the warranty).

The catch, as you might imagine, is the pricing. Here’s how it breaks down:

It’s a bit disappointing to see the price disparity between the naked drive and the version with a heatsink jump from $20 on the 500GB and 1TB models, to $50 for the 2TB and 4TB.

In any event, Seagate’s “fastest and most powerful gaming SSD” will be available this summer. Here’s hoping street pricing comes in a bit lower.