Hot News Epic CEO on Google: &quot;It's a business with a rotten soul.&quot; 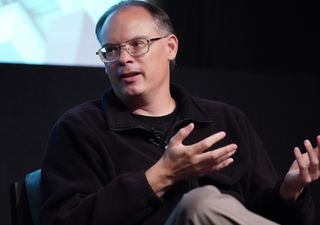 Tim Sweeney, CEO of Epic Games, seems like he’s currently having the time of his life. The incredible success of the Unreal Engine and latterly Fortnite has cemented Epic’s status as one of the industry’s true giants and, from this position of strength, the company has started to get extremely ballsy. The most obvious indication of this is its huge ongoing battle with Apple and Google over the royalties charged by those companies’ app stores—a fight that looks to be just getting started.

For us common folk, one of the most fun things about this scenario is watching Sweeney fire off broadsides about how much he dislikes this or that aspect of the platform-holders, and explaining why. With the Apple trial wrapped up, Sweeney noticed some news about Android phones apparently force-installing state contract tracing software in Massachusetts—and did not like it, not one bit.

Obviously Sweeney ties in his usual hobbyhorse of how the poor users are being blocked from Fortnite by these bad corporations (you can install Fortnite on an Android phone, though not through the ‘default’ Google Play store), but user control is also one of his recurring themes. While this is more a case of Goliath versus Goliath while all us Davids look on, and some may think that automatically installing a government health app during a pandemic is possible to argue for, calling Google a “business with a rotten soul” is fighting talk.

Mind you, such bluntness is pretty typical of Epic’s approach to these platform-holders. When its action against Google was announced late last year, the lawsuit theatrically stated: “In 1998, Google was founded as an exciting young company with a unique motto: ‘Don’t Be Evil’. Google’s Code of Conduct explained that this admonishment was about ‘how we serve our users’ and ‘much more than that . . . it’s also about doing the right thing more generally’.

“Twenty-two years later, Google has relegated its motto to nearly an afterthought, and is using its size to do evil upon competitors, innovators, customers, and users in a slew of markets it has grown to monopolize.”

Sweeney’s still at it this morning, posting photoshopped images of the Apple logo as a padlock alongside a cartoon comparing platform-holders to foxes. Does that make developers chicken?

One thing we can say for sure: big Tim ain’t scared. The verdict in the Epic vs Apple case is yet to be delivered, though the trial is over (here’s a full explainer of what’s gone down), while Epic’s actions against Google in various territories remain ongoing.