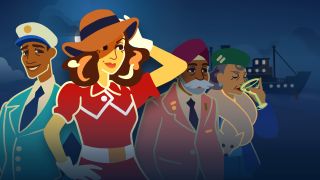 Overboard is a devilishly clever reverse murder mystery designed by Inkle, the studio behind 80 Days, Heaven’s Vault, and other top-tier narrative games. In 1935, aboard a ship making its way from England to New York, Veronica Villensey murders her husband—and it’s your job to help her get away with it by spinning a complex web of lies. It’s one of the most unique narrative games I’ve played on PC, and one of our favourite games of the year so far.

It’s a short, snappy story, but with countless interesting, hilarious, and dramatic permutations. If you want to know more, I wrote some impressions shortly after it was released. Remarkably, Inkle created the game in just a few months and launched it with no build-up or teasers. I spent some time with Jon Ingold and Joseph Humfrey, co-founders of Inkle, to talk about the design and writing of the project, and how it feels to surprise launch a game.

PC Gamer: Where did the idea for Overboard come from?

Jon Ingold: It was around January, winter was miserable, the world had just gone into lockdown again. Joe and I both have young kids, and the schools had opened and then closed again, and everyone was feeling like ‘Oh, here we go again.’ Then someone asked us, just idly, if we gave you enough money to make a game in a month, what would you do? And we said ‘nothing’ because that’s a ridiculous question. But then later we thought, what could we make in a month?

I think it was Joe [Humfrey, Inkle co-founder] who suggested it would be good to do a game where you had to lie, then cover those lies up. And then the entire idea for Overboard just appeared overnight. I wrote the first lines of dialogue, where Veronica pushes her husband overboard then wakes up with the steward knocking on her door. I posted some Ink [Inkle’s in-house narrative scripting language] into a Slack chat we’d set up for this random conversation of what we could make in a month. It sounded good, and we decided to go ahead with the project, just for fun.

PC Gamer: How did you approach development knowing your time was much more limited than usual?

Joseph Humfrey: Everyone knows it’s possible to create some kind of game experience in a weekend, because game james exist. If you think of it from that point of view, a month is forever. You can get loads done in a month if you have a kind of game jam attitude of building things fast and not engineering everything absolutely perfectly. It’s all about getting the game up and running as quickly as possible.

I know other developers who have taken this approach. If you can’t make a functioning prototype in a week, the game likely doesn’t have an elegant, hooky enough mechanic that you can demonstrate immediately. It’s slightly different for a narrative game, but I think the same philosophy still applies, in that Jon did create this hooky narrative mechanic, and it was something we knew we could, and did, make.

Tom [Kail, senior developer] made a fully working version of the game in Unity, using Jon’s Ink, within a few days. And the beautiful thing about that was that we could spend all the rest of our time on polish and art and just making it a really fun, seamless experience.

Jon Ingold: We’ve done a lot of games recently where we’ve been exploring something or trying to figure something out. How do you do an ancient language in Heaven’s Vault, how do you do procedurally generated battles in Pendragon? It’s really hard. Constantly, incredibly hard, and you never know if it’s going to work or not. So part of the idea of making Overboard was to create something that we could just enjoy. The whole project, in a way, was making sure that everyone on the team was not doing anything apart from the stuff they really like doing.

We stole code from old projects whenever we could, because that’s easier than writing new code. When we designed mechanics, we nicked them from things we’d done before. And when I was writing, I just wrote whatever the hell I felt like. If I wanted to throw in a stupid joke about God, I would. For the first draft of the graphic design, Joe suggested we just repeat the graphics from 80 Days. Normally we work with a composer for the music, which is really enjoyable. But he’s having a baby right now, so we just took it all from public domain archives.

Annie [Wyatt, illustrator] is really good at characters and costume design, so let’s give her a cast of crazy characters to draw, because that’s what she likes. And let’s not give her lots of furniture to draw, because that’s a bit boring for her. Everybody was working at top speed on stuff they just love doing. You can’t quite pull a game together like that. You have to do a bit of tedious stuff. There’s coding and debugging, and obviously the graphic design evolved from just being a clone of 80 Days.

PC Gamer: How long did the game take to develop in the end?

Joseph Humfrey: It ended up taking about three and a half times longer than we expected to develop it. That’s game development in a nutshell, really. You aim to make a game in a year and it takes three. We aimed to make a game in one month and it took three months.

Jon Ingold: We had a playable end-to-end version after about three weeks. It didn’t have all of the content and no art at all, but it was enough to put it in front of testers. So we recorded playtests, which we never normally do, and that informed so much of the story and interface.