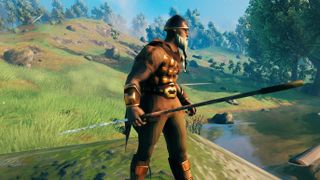 There’s a new Valheim patch out today that makes two big changes to the game, in a sort of “good news, bad news” package. First, the good news: Maypoles, which previously could only be found within abandoned villages in the Meadows biome, are now craftable.

This is a nice boon for players because Maypoles provide additional comfort when resting within their range. Comfort impacts the “rested effect,” which increases XP gains and health and stamina regeneration rates. The more comfortable you are, the longer you’ll benefit from the “rested” boost.

The bad news, to put it bluntly, is that you’re now more likely to have your ass kicked and your stuff wrecked. The patch makes changes to monster AI to make them more likely to attack structures when they can’t get their hands on you (“among other things,” which sounds ominous), and bosses will no longer run away from you. Greydwarfs are better at throwing now, too.

The reaction to the patch on Steam is somewhat mixed. Several users say that greydwarfs are already sufficiently irritating, and that making them more so will only increase the annoyance factor rather than improve the game in any meaningful way. There are also complaints about the pace of “big” updates: Developer Iron Gate pushed back its update roadmap earlier this month, and the first of four updates that had been planned for this year now isn’t expected to arrive until later in the summer.