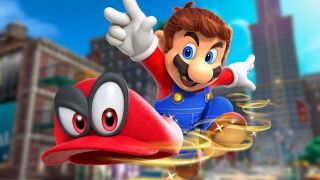 True exclusives are a dying breed. Even notorious crossplay-hater and exclusive-haver Sony has capitulated, letting us play the likes of Horizon Zero Dawn, Death Stranding and Days Gone on PC. Now platform owners talk about “console exclusives”, because chances are the game will end up appearing in PC stores. Despite this, there’s been no movement from Nintendo, which continues to despise sharing.

Nintendo being Nintendo, it’s not really that surprising. It always likes to be difficult and has made a tradition out of doing its own thing. You can always tell when you’re looking at a Nintendo game because its philosophy and design sensibilities are always clear as day, and rarely ape what the competition is doing. At every point, whether it’s game prices or online multiplayer, Mario Corp does whatever it wants. But that would also give it an advantage if it started making PC ports.

One of the big risks for a platform owner considering opening things up is that it could devalue the console it depends on. The Switch has been a huge success, and we can expect another bump when Nintendo eventually launched the new version. It doesn’t want PC ports to cannibalise all those potential Switch numbers.

Nintendo has said as much. “We are aware that many consumers play PC games,” former Nintendo president Tatsumi Kimishima told shareholders in a 2017 Q&A. “However, we believe that the integrated hardware-software business is the best way for us to provide the surprises and new gameplay experiences that we want to achieve.”

Kimishima went on to suggest that the PC wasn’t even that lucrative, mostly based on what he saw at E3 that year. “In the past I have seen a number of exhibition booths at E3 where dozens of PCs lined the hall for consumers to try out network experiences. However, at E3 this year, there were not many gaming PC exhibits or VR exhibits, which captured significant attention last year.”

E3 used to be a terrible place to gauge the popularity of PC games, and we now know he was way off base anyway. This year, we hardly saw a single game that wasn’t coming out on PC, along with hundreds that will be PC exclusives. The actual numbers don’t back up Kimishima’s assessment either. GDC surveys consistently place PC at the top, as devs’ platform of choice, while more than half of gamers play on PC.

Besides, Nintendo has been putting crappier versions of its big series on mobile for years, so it’s not like it’s entirely adverse to expanding what platforms it takes advantage of. Notably, however, these games don’t compete with games on Switch, as they’re designed specifically for mobile. Thanks to the accepted shady business practices, it’s also a lot easier for a big publisher like Nintendo to make a fast buck when tossing something onto a phone.

Ultimately, though, I don’t think PC ports would be the threat Nintendo expects. Microsoft and Sony have just been making increasingly large PCs for years, to the point that, now, it almost seems silly to own a powerful PC and a PS5 or Xbox Series X. This is especially true of the Xbox, where there’s almost complete parity with PC. We don’t have exact figures from Microsoft, but apparently the Xbox Series X and S marked the biggest Xbox launch ever. And it doesn’t even have any system-sellers.

If Microsoft and Sony don’t see it as a threat, Nintendo certainly shouldn’t. Its consoles don’t have anything that really compares. The Switch isn’t just another PC, and like every Nintendo console before it—with the exception of the WiiU—it’s loved for more than just the games available on it. Even a PC diehard like myself has to admit that there’s nothing like the joy that comes from playing something on that lovely handheld. I’m still waiting for a reason to buy one of the latest generation of consoles, but I always know I’ll buy whatever Nintendo is making.

Rather than cannibalising players, I suspect PC ports would only increase Nintendo’s audience, and then help Switch sales. There are already several games that I’ve played on PC first, before buying the Switch version. Games like Stardew Valley, Into the Breach and Slay the Spire just feel better on a handheld, and the older I get, the more I enjoy playing games in my bed between leisurely naps.

Nintendo, you’ve got nothing to worry about. People just want to play your games. Go on and throw them a bone.