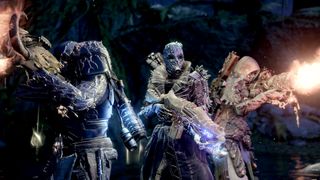 If you’re looking for the best Outriders Technomancer build, you’ll need to be comfortable operating as your squad’s support character amid the troubled world of Enoch. This long-range, technologically-proficient path is the only one that can heal fellow team members, so they fulfill a vital support role.

That said, healing isn’t the Technomancer’s only strength. While the relative squishiness of this class means I wouldn’t recommend a solo playthrough with it, you can still deal decent damage and control the battlefield from afar on top of your role as a techie medic. If this sounds like the class for you, here’s everything you need to know about the Outriders Technomancer path.

The Technomancer is one of the most diverse classes in Outriders, so there’s a lot to consider when prepping a build. If you’re going in with a team with a lot of DPS players already, you might want to consider a long-ranged healer. Perhaps you want to focus on freezing enemies and crowd control, which is entirely viable.

However, for this build we’re creating a set capable of some of the best damage in the game. This build will throw poison around, make enemies vulnerable, and focus on the Technomancer’s exceptional ability to bring the pain.

Both Cold Snap and Blighted Rounds are unlocked fairly early, but the problem with this build will be your Blighted Turret. It’ll quite possibly be the strongest aspect of your build, but you, unfortunately, won’t get it until you are quite deep into the campaign. In the meantime, the Cryo Turret is a decent alternative.

Focus on the top Pestilence path. Specifically nodes that improve your weapon damage and the Toxic status effect will be a priority. This build is high risk, but if you build it correctly, the sheer amount of damage you’re outputting will negate that entirely. In particular, Exposing Toxin, Marked for Execution, Assault Master and Empowering Antenna will synergise to allow you to output absurd damage numbers.

As with class abilities, focus your mod choices on weapon damage, with an emphasis on the Toxic Status effect.

With a handful of these mods you’ll be applying the pressure for those afflicted with Toxic. With something like Toxic Lead you’ll be replenishing your magazine without reloading, which is especially important if you have Blighted Rounds activated.

Elsewhere, it’s important to have an eye on your defensive mods. This build applies the pain, but it also can’t take too much itself. Mods like Mitigation From Death and Emergency Stance will help to keep you alive.

In terms of a legendary set to build towards, the Plague Sower set is the way to go. Once you have three pieces of the armor you’ll activate its set bonus. So, when you apply Toxic (all the time), you’ll gain a 5% damage reduction for 5 seconds. This stacks up to 5 times too. It’s one of the coolest sets in the game.

For this build, make use of tactical assault rifles. Your class ability, Assault Master, will be doing a lot for you in this regard.

Assault rifles are strong across the board, and this class makes more use of them than any other. It should be your primary and will do you good in almost any situation. The archetype can work at close, medium and long ranges, so you’ll always have options in any situation.