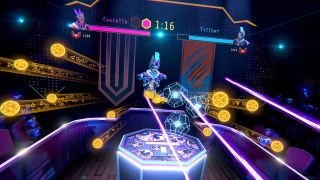 Less than a week after announcing it intended to start testing ads in VR, Facebook has hit a snag—the game developer it initially announced it was working with has withdrawn (via UploadVR). This comes after a sizable backlash from the community that saw the announced game, Blaston, inundated with negative reviews.

The review bombing isn’t necessarily without merit, as Blaston is a paid-for game. At the time of purchase, gamers didn’t know they were going to be treated to virtual advertisements, thus the uproar. Everyone expects ads in free to play games, less so in something you’ve already paid for.

The developer, Resolution Games, has been quick to backtrack on its decision to try out ads in Blaston, although it hasn’t ruled out exploring the idea in the future with its fishing game, Bait!, which just so happens to be a free-to-play title.

Virtual reality fishing doesn’t sound like such a bad concept, although I’m not sure there are so many obvious opportunities for interactive advertisements on the riverbank. Otters with Gucci handbags and Barbour-wearing toads isn’t that common an occurrence, although anything is possible in VR I suppose.

Let’s face it, now that this particular advertising bottle has been opened, there’s no putting the top back on—it’s coming whether the review bombing continues or not. The question is, how invasive is this advertising going to be? The original concept for Blaston required the user to actually click on the ad to interact with it, which as Wes pointed out, isn’t something that we’re naturally inclined to do.