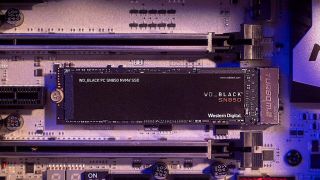 Western Digital has some good news for a subset of Black SN850 SSD owners, and specifically those who have installed the drive onto a motherboard based on AMD’s X570 chipset for Ryzen. The company has found the issue that is causing write speeds to plummet on some setups, and will be issuing a firmware fix in the coming weeks.

We have not experienced this issue ourselves, and based on our own testing, the Black SN850 ranks as one of the best SSDs for gaming. It is part of a crop of second generation PCI Express 4.0 models that offer faster speeds than the first round of PCIe 4.0 drives. In this case, the Black SN850 is rated to deliver up to 7,000MB/s of sequential read performance and up to 5,300MB/s of sequential write performance.

The drive came close to those advertised speeds in our testing. However, reports of reduced performance on some X570 motherboards recently began to surface. This happens when plugging the SSD into an M.2 slot that is connected to the chipset.

It’s not a small performance dip, either. The folks at ComputerBase ran some tests and observed write performance being cut nearly in half when connecting the drive to the aforementioned slot—one of the benchmarks saw write speeds go from 5,255MB/s to 2,972MB/s, which is a 43.4% reduction.

Performance appears unaffected when installing the drive in an M.2 slot that is controlled by the CPU rather than the chipset. For this reason, Western Digital recommends using one of those slots while it works out a fix.

In a statement provided to our friends at Tom’s Hardware, Western Digital said it anticipates rolling out a firmware fix next month.

“The WD Black SN850 NVMe SSD can experience a decrease in write performance when connected to a chipset M.2 slot on certain motherboards, specifically when max payload size (MPS) is set to 128 bytes (128B). To resolve this issue, Western Digital will release a firmware update that eliminates a restriction in our product for this setting of MPS, expected to be available by July 12, 2021,” Western Digital said.

What if the optimal M.2 slots are already taken? Well the good news is you will still benefit from fast write speeds, even if falling well short of the drive’s capabilities. To put it into perspective, the fastest SATA-based SSDs top out at around 580MB/s, which is more than five times slower than biggest performance hit observed by ComputerBase.

It’s still disappointing to fall way short of the performance you paid for, regardless of the SATA comparison. Fortunately, a fix is just a few weeks away. And applying it is easy—once it arrives, you only need to fire up the Western Digital Dashboard utility and it will automatically prompt you to download and install the new firmware. Just be sure to back up any important data first, in the off chance things go sideways.