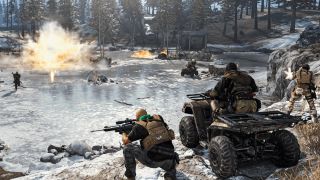 Looking for details on a new Warzone map? Season 4 has arrived, and while there’s no new map in store for the battle royale this time around, several satellites have crashed into Verdansk, altering the terrain in several locations. The nuke event that heralded the end of Season 2 has come and gone, but while the original Verdansk map was completely destroyed, Verdansk ’84 gave us areas to explore.

As any Warzone veteran knows, it pays to learn where the hot zones on each map are located. Of course, the best Warzone loadout will help you win in a firefight, but knowing the region is a solid advantage when the gas starts creeping closer. So whether you prefer Verdansk ’84 or Rebirth Island, this guide has you covered. Here’s everything we know, including rumours of a new Warzone map set for later this year.

There are rumours that the current Verdansk ’84 will be replaced with a map set in the World War II era. It’s apparently set to coincide with the release of the also-rumoured Call of Duty: Vanguard in November. According to VGC, the new map is said to be Call of Duty’s “largest and most ambitious to date”.

There’s been no official confirmation but we’ll be sure to update you as soon as we know more.

There have been a few small changes to Verdansk in Season 4—though nothing near the scale of the nuke event. Several Warzone satellites have crashed and the remnants of these can be found at various locations, including Gora Bridge and Krovnik Farmland.

Otherworldly red doors have also shown up in Verdansk, though their locations seem to be random and change with each match. But if you manage to locate one, you could find yourself with more loot than you know what to do with—though if you’re unlucky, the door might end up killing you.

Lastly, the Standoff Gulag is no more and has been replaced by the Hijacked Gulag, which is based on the original Black Ops 2 multiplayer map.

The best Warzone loot can be found in supply boxes scattered across the map. The valuable items found in these chests are random, containing weapons (often blueprints with pre-fitted attachments), field upgrades, cash, and even the occasional killstreak. However, it’s always worth keeping an eye out for the rarer, orange boxes, which hold better gear such as gas masks and armor satchels that let you hold more armor plates.

Hot zones are where you can expect the most bloodshed to go down at the very beginning of the game. Whether you want to avoid them so you can loot in peace or find somewhere to immediately bloody your hands, check the list below. It’s no coincidence that these locations also coincide with loot-rich spots.

Rebirth Island is a much smaller map, currently available in its own playlist. Modes like Rebirth Mini Royale Quads/ Duos are fast-paced matches that take place in condensed areas on the island. If you’re hoping to run into other squads quickly as you hunt for the best Warzone guns, here are the best Rebirth Island drop locations: