Hot News Portal Reloaded is the closest we&rsquo;re likely to get to Portal 3 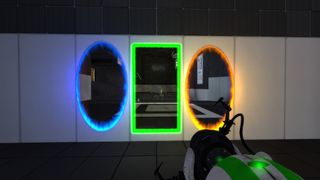 It’s been slightly over a decade since Portal 2 surprised everybody by being an impossibly brilliant sequel to a game considered close to perfect. While normally at this point I’d lament how Valve hasn’t made a third, frankly I was fine with it. Unlike the Half-Life series, the story of which Valve has left frustratingly incomplete, Portal felt finished after the second game. You could argue it felt finished after the first game, but Valve got away with making a second.

Leaving the series at two seemed like a wise decision, and one I was happy with. But my contentment has been obliterated by Portal Reloaded, a mod that blows open Portal’s puzzling potential in a way that almost matches the wow factor of the original. It’s so good that it makes Portal 2 look like it was struggling for ideas, featuring a mechanic that could easily form the core of a third Portal game.

Now, to be clear, Portal Reloaded isn’t a Valve-level production. Reloaded doesn’t have the same visual grandeur as Portal 2, and there’s no Wheatley or Cave Johnson and definitely no GLaDOS. It does feature a convincing facsimile of the robotic announcer heard at the start of Portal 2, but mostly the story is kept light, closer in spirit to the original game.

To briefly explain how this works, there are two versions of every test chamber in Portal Reloaded, one in the present, and one twenty years in the future. The present versions of these chambers represent Aperture Science at its most pristine, all sleek white panels and bright red buttons. The future versions, by comparison, are falling apart and overgrown with vegetation, much like the early stages of Portal 2. The chambers are also mirror-images of one another. Stepping into the time portal will see you step out the other end at the exact same point in space, but in the alternate timeline.

Visually it’s a neat gimmick, although considered on its own isn’t that impressive. It’s how Portal Reloaded uses this gimmick where its ingenuity becomes apparent. Time travel in Reloaded functions according to a handful of key rules. The first rule is that any object moved in the present will move to the same spot in the future. If you pick up a cube in the present and put it on a button, when you travel into the future, you’ll find the future version of that cube waiting for you in the same place. However, an object in the future can be moved independently of its present equivalent, thanks to the logic of cause and effect.

A simple Portal Reloaded puzzle might involve two buttons in the present that need to be pressed to open a door, but only one cube. The solution is to go into the future, grab the future version of the cube, and bring it into the present to place it on the button. However, you must ensure you move the present cube into place first, otherwise when you move it, the future cube will disappear because you altered its timeline in the present.

If at this point your brain is starting to feel a bit stretched, that’s exactly the sensation Portal Reloaded strives to evoke. Portals follow the same rules, meaning you can have two spatial portals in the present, and two differently placed spatial portals in the future. Including the time Portal, you’re dealing over twice the number of puzzling elements in any given situation.

Over the course of 25 chambers, the puzzles slowly evolve in complexity, introducing the puzzling elements from Portal 2, lasers, faith-plates, light-bridges. One of my favourite puzzles involves using redirection cubes to manipulate a single laser through two different timelines and four different spatial portals. Teasing out the solution, experimenting with different layouts as my brain wrapped itself around thinking in four dimensions was incredibly satisfying.

This is what I mean when I say Reloaded recaptures the “wow” factor of the original game, something which Portal 2, sly and hilarious as it was, didn’t quite manage to achieve. It feels like something I’ve never experienced before, and my mind has to constantly adapt to accept Reloaded’s way of looking at the world. It shares other commonalities with the original too, such as its deft sprinkling of mystery and dark humour. At one point, when the puzzles become more challenging, the robotic announcer states “Think about this, if you don’t see your own corpse lying in the future, it is safe to assume you solved the chamber sometime during the last 20 years.”

Revelatory though Reloaded is, there are a few flaws. The added complexity of the puzzles can result in frustration, especially if you make a mistake. It’s very easy to accidentally alter the timeline of the future cube by bumping into the present cube, which can require you to repeat the entire process of solving a puzzle. It’s a fleeting affair too, between two and four hours depending on how big your puzzling brain is. While it’s unfair to call this a problem—the mod is free, after all, I could happily have played another 25 chambers of Reloaded’s brain-expanding puzzling.

Indeed, Portal Reloaded is probably the best puzzle game that I’ve played since Return of the Obra Dinn. It stands on Portal’s shoulders to deliver a mind-meltingly clever series of puzzles, and one of the smartest implementations of time travel that I’ve seen in a game. I doubt that Valve will ever make a Portal 3, but if they do, Reloaded’s creator Jannis Brinkmann should be the first person the company hires.

Leave a reply "Hot News Portal Reloaded is the closest we&rsquo;re likely to get to Portal 3" Cancel reply

Related Post "Hot News Portal Reloaded is the closest we&rsquo;re likely to get to Portal 3"