Hot News Halo: The Master Chief Collection may someday support up to 60 players 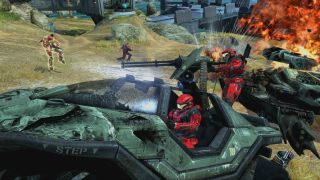 Halo’s bombastic big team battles may someday get a whole lot bigger, according to one developer who wants to see Halo: The Master Chief Collection‘s player cap of 16 pushed as high as 40 or 60.

Speaking during an Xbox stream (clipped below by YouTuber Mint Blitz), 343 producer Sean Swidersky noted that the team is doing “investigations on increased player counts above 16” in the throwback collection.

He does note that, while implementing this stuff is supposedly not too hard in itself, the knock-on effects to performance are more of a pain point—especially on older consoles still supported by the MCC. But while Swidersky doesn’t mention it, there’s also a big question about where you’re supposed to fit all these players.

With the possible exception of Reach’s Forge World, Halo’s maps are pretty dinky—with even the larger ones only built for maybe 24 players, tops. Sandtrap with 16 players feels manageable. The same map with 60 angry Spartans would be uncontrollable chaos. But support for 60 players would be a boon for the game’s modding community, incentivising more massive, Battlefield-sized maps like Extinction (assuming the MCC stops breaking them with each major update).

Halo Infinite probably isn’t getting a battle royale. But if 343 does follow through with bumping up the MCC’s player cap, modders might just give us one instead.