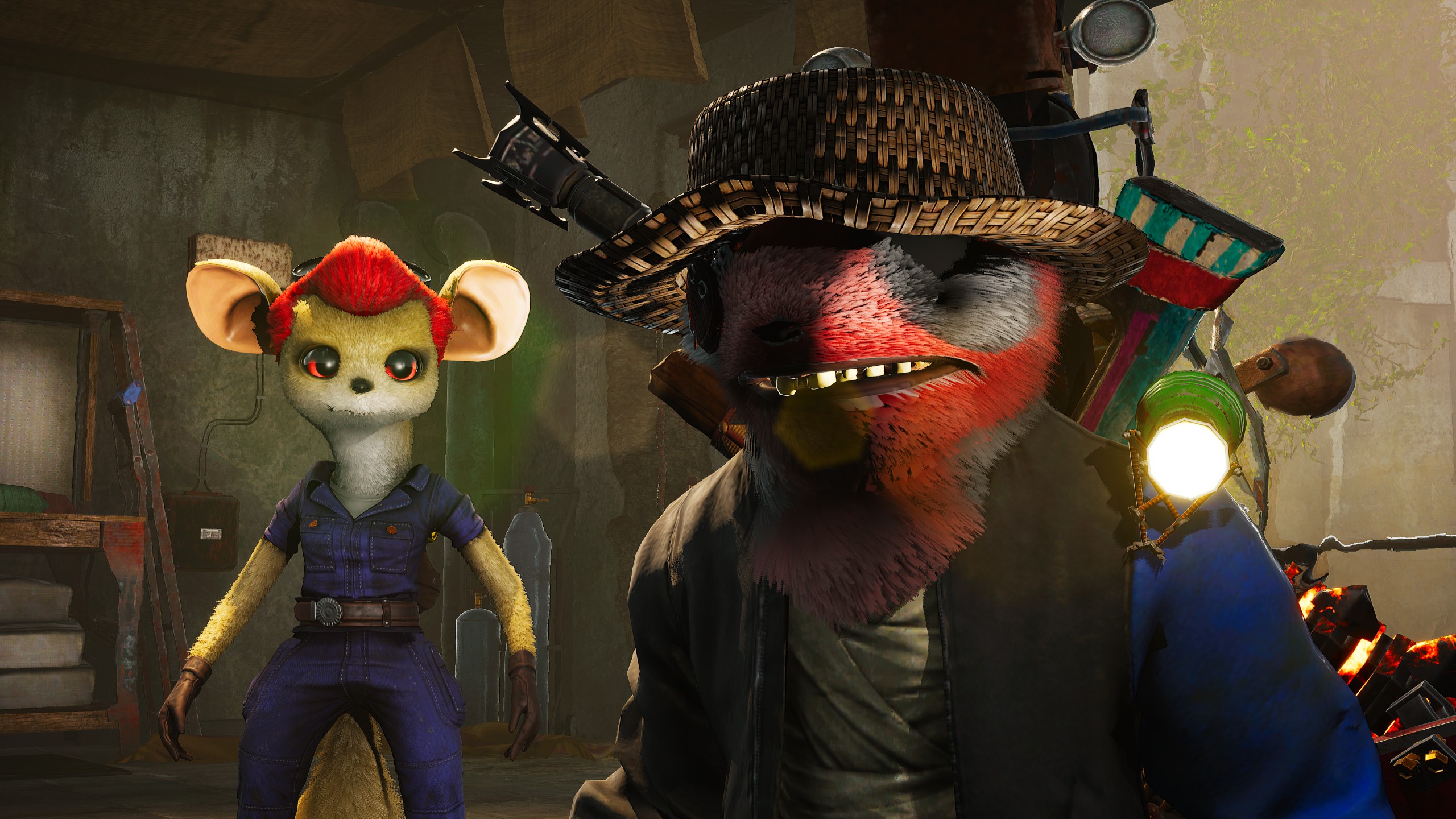 Biomutant is a boring game that survives on charm. What other open world game stars a bipedal mutant cat-thing that specializes in martial arts? This is an RPG in which you can leap from your grotesque, grinning horse, summon a ball of mucus around yourself to roll up your enemies like ants on a moist jawbreaker, ‘detonate’ the mucus to send them flying, and finish with a slow-motion Max Payne-esque volley of electric bullets from a gun with a trumpet horn for a muzzle. It’s tragic, then, that hollow progression and an incessant narrator suck out so much of the joy in Biomutant.

Biomutant feels like it’s going to be much more, but in practice it’s an endless stream of new ideas that go nowhere and beautiful, toxic landscapes with little to offer except an excuse to use photo mode. (I’m at 127 screenshots and counting.) It’s especially disappointing because Biomutant’s nonchalant, optimistic vision of the post-apocalypse is a refreshing take on the end times, with a weasel dressed like Elvis for every fascist cannibal emperor in Fallout.

But if you strip out the gangly, affable muppets, all that’s left is a broken open world RPG with little else to discover except another cheap riff on the same color-matching puzzle, plastered over a rotary phone or microwave or whatever. At least it looks amazing.

Biomutant’s human-free post-apocalypse is both stern and sweet. It imagines the worst case scenario for mankind: total eradication from pollution, late-late-capitalist greed and exploitation, war—it’s a who’s who of the biggest bummers. But it also depicts a vibrant world teeming with life after we’re gone.

Even though there’s another apocalypse on the way, it’s embraced with curiosity and inevitability by most of earth’s future fur citizens, from a hulking chef who only aspires to make the tastiest food possible to a mousy fashionista who wants everyone to dress how they feel before the earth implodes. Aww.

I respect stories that give the void a warm hug, so I’m surprised how much the narration and writing made me wish Biomutant’s world ended yesterday. David Shaw Parker’s performance as the omnipotent narrator isn’t bad, but his saccharine tone clashes with the fragmented English in the writing, which is often embarrassingly twee. I never want to hear a Shakespearian voice describe piss and shit as “yellow juice” and “brown bobs” ever, ever again.

The way it’s paced prolongs the pain, every conversation opening with a few seconds of cute mutant gibberish, after which Parker reads the text I’ve already skimmed in the same indulgent full-throated tone and primitive syntax, no matter the context. Simple sentences take a couple seconds to decrypt because every other word is replaced with a complicated compound. “That’s a Pling-plong-booth from the by-gone, back when you needed to cable words via buzz-wire instead of air-waving them” instead of ‘People used to stand in boxes to talk’. When Parker reads these lines aloud I feel like I’m being mocked. It’s unbearable.

The characters don’t help. They’re written more like fuzzy parables than three-dimensional fur-people. Cute glimpses of their personal lives are interrupted by long-winded lectures on morality, intercut with your character’s inner monologue, all narrated by Shaw.

If I couldn’t slam spacebar to move things along, Biomutant would be made irredeemable by the narration alone. It’s a case of subtraction by addition, a performance that washes over and homogenizes the impressive breadth and creativity in the mutant models, and glazes over their surface level allegory with lethal levels of pomp and circumstance. Biomutant’s beautiful world is much better off speaking for itself, from a distance at least.

It’s easy to see why Biomutant draws so many The Legend of Zelda: Breath of the Wild comparisons. There’s my little ferret guy coasting through the air on a paraglider, the gnarled roots of the Tree of Life spiraling off in every direction, grassy knolls cut through with rivers and roads, an old highway crumbling above it all. Orange buttes jutting up in the east, a massive black scar to the west, a crumbling city skyline sinking into the crust—it looks amazing on a good PC. Every vista is a promise of adventure, but nearly every journey is the same.

The classic open world mantra applies here: If you see it, you can go there. But should you go there? Probably not. That eerie tower at the top of the mountain and the deep cavern buried beneath the suburbs are both just full of junk loot and simple puzzles like every other location in Biomutant. Sidequests are bland too, most of which involve finding old world technology to complete an impressive breadth of variations of the same spinning dial, color-matching puzzle.

So I’m still surprised, after dozens of pointless collection quests and puzzles that are barely puzzles, how often Biomutant forces me to stop and reckon with what I’m looking at, be it a weasel in a space suit piloting a hot air balloon over a blackened chasm, or a huge ancient tortoise shuffling around the continent looking for a carrot to match their metabolism. Biomutant is a pretty good time if all you want is something strange and nice to look at.

The first lap around the map, I was drunk on Biomutant’s scenery. It’s a genuinely stunning setting and you get some fancy rides to unravel it with, including a huge mechanical hand that turns into a literal hand cannon. Is it useful? Almost never. But is it cool? Yes, which defines the bulk of Biomutant, really. Because whether stomping around the ruins of a city in a huge mech or gliding through a toxic swamp on a homemade jet ski with an iron dragon head bolted to the front, the terrain is rarely an obstacle or threat, and the creatures in the farthest corners of the map are rarely a bigger problem than those in the starting area.

Combat scenarios almost always consist of a burly mutant accompanied by some little guys, and a few melee and ranged minions, but they’re easily taken care of by any means. Dodge, shoot, punch or slash—your verbs are limited—I can’t recall a single fight that forced me to take a look at my gear, stats, and powers to do some serious theorycrafting.