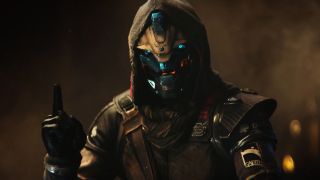 In an unusual twist on the basic principles of capitalism, Bungie is asking Destiny 2 players not to buy the new Spicy Ramen Coupon emblem, because it’s going to give it away for free.

The trouble began over the weekend, with the discovery of the “Classy Order” emblem, and more importantly, how to unlock and add it to accounts. How exactly it was being done isn’t clear—some suspect an inside source at Bungie, according to this Reddit thread, while others say an old duplication glitch is part of the process—but whatever the specifics, people were spending money on acquiring the entirely cosmetic item.

That led senior community manager dmg04 to tweet a warning about buying it, and also to bemoan the damaging impact of datamining.

“Don’t buy the Spicy Ramen Coupon emblem. It’s meant to be a free gift on Bungie Day, from us to you,” he tweeted. “Dataminers – please stop spoiling content, whether it be story or emblem codes. I know it can be exciting to be the first person with cool info, but please respect the fun.”

Others claimed that the information wasn’t dug up by dataminers, however, but was instead revealed through the Destiny 2 API. That might seem like a semantic point, but the API is a publicly-accessible resource used by popular third-party sites light.gg and destinytracker.com—a well-known and commonly-used source of information, in other words. One Twitter user complained that the real spoiler wasn’t the existence of the emblem, but the fact that Bungie is giving it away, which wasn’t revealed by the community but by Bungie itself.

The incident frames an interesting ethical question about the roles that fans play in videogame PR campaigns. Is there an obligation of any sort to keep this stuff quiet? I’m not unsympathetic to the plight of Destiny 2 developers, but Bungie pretty clearly wants it both ways: A dedicated, passionate fan base that won’t get too excited when it finds out things it’s not supposed to know. I don’t think that’s realistic

Regardless of your feelings on that topic, buying the emblem is definitely not recommended, as it will be going out to all players soon enough: Bungie Day happens on July 7, a reference to the studio’s apparent fondness for the number 7. As for the significance of spicy ramen, that’s a bit of lore tied to Cayde-6, the former Destiny 2 Hunter Vanguard. Before he got turned into Cayde-6 Feet Under, he was a big fan of the food in the Tower’s ramen shop, and is now memorialized there in a famous photo.