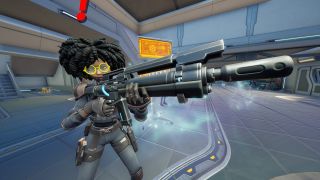 Fortnite Season 7 is here, and what’s an alien invasion without some awesome weapons blasting people to ash? Thankfully (or maybe tragically), humanity has the capacity to develop its own super weapons, or to just steal the aliens’ weapons out from under their nose.

Fortnite’s mythic weapons return (sort of) to let players dominate in battle royale. As in other seasons, you’ll need to use gold bars to purchase a mythic weapon from a specific NPC.

Season 7 also introduces a number of new weapons that come in different rarities, but can be just as devastating in the hands of a skilled player. These come either from IO, the Imagined Order Jonesy has been working against, or the invading aliens.

Zyg and Choppy’s Ray Gun is a mythic-level ray gun, similar to the more common variant. On the positive side, it will basically never run out of energy, meaning you don’t have to waste time reloading or dealing with terrible recoil. On the negative side, it’s damage output is dwarfed by stronger weapons, and you’ll need to maintain your aim perfectly on your opponent to do continous damage. So don’t bring it into a fight with someone who’s crazy about building defensive walls.

The ray gun is held by Zyg, who will react defensively as soon as you come near him. Be ready for a solid fight. It’s also possible that alien parasites will spawn around here.

The Mythic Pulse Rifle is an extra powerful version of the Pulse Rifle you’ll find elsewhere. It’s fully automatic when not aiming down your sight, and has a slower pace of fire when aimed.

The Mythic Pulse Rifle is held by Doctor Slone, the new IO character leading the charge against the alien invaders. She’s hiding out at Corny Complex. Look for the red barn. Inside, you’ll see a large circular metal door in the barn floor. You can’t destroy that door, but a nearby staircase will lead you down to the lower levels. You’ll find Doctor Slone hanging out in the lobby or nearby, but be careful because she’s protected by IO guards. It also seems that she can spawn clones of herself to A) add damage and B) confuse the heck out of you.

KYMERA RAY GUN: This alien creation fires a continuous beam of energy. Stats depend on which rarity you get, but the short version is that you’ll be firing a weapon with a magazine size of 100,000, firing “15” shots of energy per second, dealing somewhere between 9 and 11 points of damage each. You reload by ceasing fire, and it only takes 2.5 seconds to cool off. The only catch is it’s not great at destroying structures, making it solely an anti-personnel weapon, or maybe even good for crowd control. Basically, if you hate reloading, you’ll love this weapon.

You can usually find the Kymera Ray Gun held by the UFO-driving Trespasser NPCs.