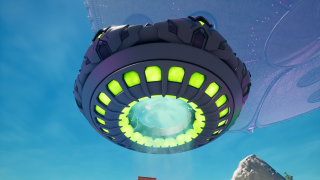 Fortnite Season 7’s aliens have introduced plenty of new gameplay mechanics to contend with. Players have been battling UFOs as often as they’ve been battling each other. Well now the extraterrestrials have a new trick up their sleeve. The giant mothership that’s been looming over the Fortnite map since the start of the season is now a new battlefield that players can access in order to fight for rare loot.

Thankfully, this visit to the alien mothership doesn’t involve any probing (that we’re aware of). It’s still somewhat tricky to get there, though, so we’ve whipped up this guide to show you how and what to do once you’re there.

Your first step is to look on the map for the large alien ship symbols. Instead of gunning for the tiny one-man UFOs from earlier this season, you’re looking for the considerably larger UFOs (usually) looming over named POIs.

Once you’re on the ground, you should at some point see beams of light emit from the large UFOs in the sky. These are your classic abduction rays. They won’t abduct you immediately, though. Instead you’ll probably have to hang out in the light’s cone for roughly 15 to 20 seconds before you’re zapped to another location.

Congratulations. You’re the aliens’ newest test subject, alongside whoever else managed to get abducted. Your weapons and armor have been temporarily replaced.

You now have a jetpack with a timer counting down on the back and an alien gun that acts similarly to the flintknock pistol. It won’t damage players, but it will send them flying if hit.

You’ll start off in an alien cell, but then you’re quickly teleported to a new arena made of familiar Fortnite locations, some of which are now floating at odd angles in the air. You also have low gravity and a double jump, meaning you can cross large distances easily. Just be careful not to fall into the pit below.

So how do you get the best loot?

Your mission here isn’t to eliminate other players. Instead, you’re hunting for golden orbs that will unlock more tiers of loot. You can also grab gray time orbs to add more time to your clock.

Obviously, grab the golden orbs before someone else can collect them. You’ll have to click on the “interact” prompt like any other item in Fortnite to do so. One tip for getting there before other players is to look at the gold ray of light that shoots out below the orb as it descends from the sky. That’ll tell you exactly where it will land. Just make sure that someone doesn’t sneak up on you and knock you off the platform.

The golden orbs also appear to respawn every 25 to 30 seconds, and I’ve only seen them in groups of threes, so the fighting will be tough.

Once your timer has run out, you’ll be teleported to a room filled with loot chests of whichever rarity you managed to climb to. You’ll have a few seconds to open as many chests as you can and grab whatever loot strikes your fancy.

Obviously, if you manage to collect enough gold orbs to qualify for legendary loot, this will make the rest of your Fortnite match much easier. On the other hand, if you only manage to get uncommon loot, you might have wasted valuable time you could have spent searching for materials on the ground.

Either way, it’s an interesting new mechanic in Fortnite, at a time when the game definitely needs to keep innovating on its formula to keep players interested through a 15-week season.

Need more Fortnite guides and news? Check out where Fortnite is holding another major concert, or where you can find alien artifacts each week.