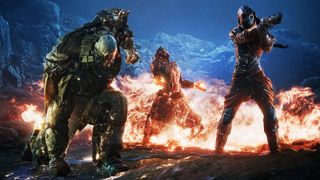 If you’re looking for the best Outriders Pyromancer build, you’ve come to the right place. With the right combination of skills, weaponry, and armour, your enemies will really be feeling the heat. Outriders’ fire class is familiar to the Warlock in Destiny 2, and is most comfortable fighting at mid-range distances. So, try not to stray too far away from enemies, or get pulled in too close.

We recommend you bring in friends with you if you choose the Pyromancer: When compared with the other Outriders classes, this inferno path can be a little vulnerable as you climb the Outriders World Tiers. Without the health bar of the Devastator or the damage and tools the Trickster possesses, the Pyromancer can feel exposed.

Nevertheless, it’s still a fun class to play, and I’m here to help you out if you’re interested in this mage-style class. So, here’s the best Outriders Pyromancer build based and how to play it deep into the endgame.

Outriders’ resident mid-range class is in a great spot. It has several viable builds and methodologies. In many ways, it may be the most versatile class out there. You can certainly spec towards weapon damage and make use of Volcanic Rounds. The Rounds abilities are strong on the Technomancer and Trickster classes, and are totally viable here too.

However, the Pyromancer has something other classes struggle with. A massive damage potential on a pure, ability-based build. Fire-based Altered out there can apply Burn to just about everything in a room and continue to reap the rewards from various synergies.

The build we are going to get into today is one of the most robust in the game and is viable in just about any situation. Solo, Teamplay, area-of-effect and single-target damage are all achievable with this one build, making it one of the most versatile builds you can get in the game. Let’s get into it.

Thankfully the most crucial aspects of this build come very early on. Heatwave is the very first ability you get, and the ability this whole build is based around, Overheat is available at Level 6. Thermal Bomb is the third skill, but it’s the least important. Ash Blast is an alternative option, so if you have good mods for that skill, feel free to alternate.

This build is going to be all about spamming your abilities. Much like the Devastator, the Pyromancer thrives in its ability usage, and in particular applying its Burn effect across the board. For that reason, you arsonists out there are going to want to take advantage of the bottom tree path, Tempest.

The things you are looking for here is both Anomaly Power and Cooldown Reduction. You want to be using your abilities and using them often to ignite more and more enemies in an arena.

However, it’s worth noting that there are several options in the Fire Storm tree that are worth considering. Warm Up, Wildfire, and Extinction are all perks you should consider dipping into the middle tree to check out.

As is the case with most ability heavy builds, there are going to be several Tier 1 mods you want to take advantage of. This build is all about applying Burn, and super-powering the stacks and status affects you will be applying.

In particular, you are going to want to take advantage of mods that boost Overheat to the max. With your build being focused on reducing the timers on your cooldowns, you will be able to use the ability nearly constantly. Having it be even more versatile will allow you to really apply the Burn at all times.

One of the drawbacks of this build though is that quite a few of the mods will be hard to come by. You may have to grind out some Legendaries to really take advantage of this build at its absolute best.

That being said, there are more than enough Tier 1 options here that should be easy enough to find and sustain yourself with until you can acquire all the pieces you are going to need.