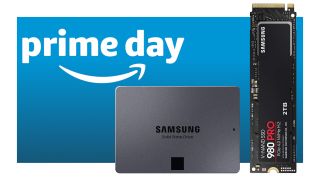 It’s great to see so many SSDs in the Prime Day sales, especially when some of the best SSDs around have enjoyed big savings. This makes it a great time to upgrade your gaming rig to embrace the latest tech, which is not only much faster than what has gone before, but you can get a much bigger chunk of the stuff, especially at these reduced prices. And with 2TB SSDs coming in as low as $235, it really is a great time to upgrade.

If you’re still running a SATA-based SSD as your main boot drive, or dare we even imagine a spinning platter hard drive, then the latest PCIe SSDs represent a massive uplift in performance. You do need to make sure your motherboard has an M.2 slot that you can boot from though—check your motherboard’s website to make sure. You could upgrade your motherboard if not, there are a few deals around, or alternatively, grab a really big SATA drive like the 4TB Samsung 870 QVO for more room to breathe.

Quick note: If you’ve been eyeing up the WD_Black SN850 and Samsung 980 Pro, then you are going to need to use a platform and CPU that supports Gen4 M.2 to take full advantage. If you’ve got an AMD Zen 2 or Zen 3 CPU and a 500-series motherboard, then you’re good to go. Only Intel’s very latest Rocket Lake CPUs support PCIe 4.0 though, so bear that in mind. These drives will work in PCIe 3.0 slots as well, although you’ll be limited by the interface to 3,500MB/s (which is still plenty fast).

Don’t be intimidated by the idea of upgrading your boot drive either. Most SSDs come with software that makes copying your existing installation over to your new SSD as difficult as clicking the mouse a couple of times, i.e. not at all. We’ve covered the general drive cloning process previously.

The only thing you have to watch out for is making sure the UEFI/BIOS is booting from the right drive after you physically install it. It depends on your motherboard, but pressing F12 at boot generally lets you pick what drive to boot from.

Alternatively, you could seize this as an opportunity to install Windows on your system from fresh. You know, throw out all of the rubbish that you’ve collected over the years, and go for that fresh install feeling. Though that can be a bit of a chore if you’ve got a slow internet connection, and loads of games (and apps, I suppose) to download.

If you’re buying a large, but not particularly fast drive, like the Crucial P2 2TB for $235.61, then you just need to make sure that you’ve got a spare M.2 slot free. Oh, and make sure that you’re UEFI/BIOS is set up to boot from your main OS drive, and not this, and you’re good to get copying your files across.

Below you’ll find a list of the SSDs that we think are worth upgrading your system with: