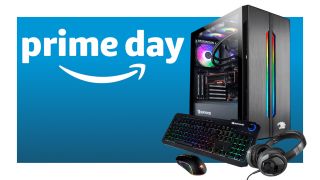 It was a surprise to absolutely no one that there were no graphics card deals to be had this Amazon Prime Day. They rarely make an appearance most years, but this year the silicon shortage has meant that any GPU even approaching the MSRP would be considered a deal of the century. In summary, there are no graphics cards, basically, and if there were, the asking price would be the opposite of a bargain.

That’s not to say that you can’t get your hands on AMD or Nvidia graphics cards, though. Just not as a DIY builder or upgrader. You can grab them as part of a full system, and there are some decent prices out there, although ‘deal’ may be a bit strong, depending on what you’re looking to buy.

There’s also the question of the amount of time you can expect to have to wait to take delivery of your brand new system. Plenty of well-respected system builders and OEMs are quoting months to get machines out to buyers, and that’s not included random delays in the meantime.

This is why these two systems from iBuyPower are so notable. Not only do both machines feature the latest graphics cards from AMD, but they both are built under the company’s 2-day rush service. So if you order today, they’ll be with you before the end of the week. That’s pretty incredible given the state of the market.

If neither of these machines appeals then you can use the site’s Easy Builder to help you put together whatever system you have in mind. It starts by offering up eight different games for you to focus your build around, from Fortnite to League of Legends, what sort of resolution you’re aiming for and what your budget is. The recommendations aren’t bad either, although keep an eye on that delivery date because you’ll be hitting late July before you know it.