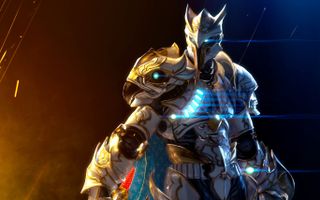 AMD’s long awaited answer to Nvidia’s game-prettifying DLSS technology is here. We’ve had a good old play with FidelityFX Super Resolution (FSR) and it works. In fact, it works flawlessly. But it’s also not quite what you thought. At least it’s not if you thought it was going to be something directly comparable with DLSS.

‘Flawlessly’ in this context doesn’t mean indistinguishable from running at full native resolution.

But let’s not get ahead of ourselves. Both AMD FSR and Nvidia DLSS set out to do largely the same thing, namely to improve image quality through upscaling a low res input to a higher resolution while boosting performance over fully native rendering. The holy grail? Enjoying that glorious 4K experience without the debilitating GPU load which normally comes along for the ride.

But here’s the catch: AMD FSR and Nvidia DLSS go about things in dramatically different ways. Nvidia’s DLSS uses fancy pants AI and so-called ‘deep learning’ (hence the name Deep Learning Super Sampling). This uses industrial levels of compute power to analyse a given game, learn how best to upscale that game’s specific visual content, and then use dedicated AI hardware in Nvidia GPUs (those Tensor cores) to algorithmically apply these learnings to create upscaled output to rival true native rendering for clarity and detail.

AMD’s FidelityFX Super Resolution is a more conventional spatial upscaling technology. There’s no AI, no ‘deep learning’. Instead, FSR involves a spatial upscaling pass, followed by a sharpening pass, after which post processing effects like film grain and chromatic aberration can be added. In raw performance terms, AMD says FSR can boost frame rates by as much as 2.4x.

As for more specifics, we did put the question. But for now the finer details of AMD’s spatial upscaling algorithms aren’t entirely clear. AMD told us that, “FSR is a spatial technique, it does not rely on temporal data or use machine learning. It takes the input image which is anti-aliased and applies a specific algorithm to upscale it and reconstruct high-definition edges in the process. A second pass then applies sharpening to extract additional pixel detail from the image.”

Which really just repeats that FSR is spatial upscaling, but with a sharpening pass.

Still, it does have one more trick up its sleeve. Unlike DLSS, which requires a late model Nvidia GPU, AMD’s FSR tech is compatible with a wide range of graphics hardware, including not just legacy AMD GPUs like those from the Polaris family (Radeon RX 580 et al) but also Nvidia graphics cards. For the record, that includes all AMD GPUs from the RX 400 onwards and all Nvidia GPUs from GTX 10 series and newer. Ryzen APUs are also supported.

That speaks to the more conventional spatial upscaling approach of FSR. It doesn’t require specialist AI hardware such as Nvidia Tensor cores.

On the upside, our experience with a range of gaming titles of varying quality indicates the experience is extremely consistent. AMD made FSR-compatible builds of Godfall, Kingshunt, The Riftbreaker, Terminator: Resistance, Anno 1800, and Evil Genius 2 available for testing. Far Cry 6, Myst, and Baldur’s Gate 3 are among a further 12 titles AMD says are coming soon. Whatever the game, FSR just works, including on an Nvidia GeForce RTX 3080 board.

On the downside, it lacks the magic of DLSS, which at its best can look almost indistinguishable from native resolution. Put another way, you know that softening and blurring of image quality you get when running non-native resolutions? That conventional upscaling, when you’re running, say 1080p on a 1440p panel or 1440p on a 4K monitor?

As our screen grabs just about show, it’s still there with FSR, only more subtle.