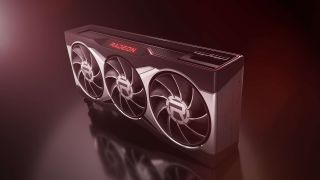 At its core, FSR is an upscaling technology. It takes a low resolution image, say 1440p, and upscales it to 4K using a fancy algorithm of AMD’s own creation.

AMD breaks it down into two stages. First, the game is rendered at a lower resolution, which nets a performance increase in line with what you might expect from having fewer pixels to deal with. After that, FSR upscales the frame back up to 4K using spatial upscaling, and in doing so uses an advanced edge reconstruction algorithm and further sharpening to improve that image’s quality.

The result: an image that has the performance hit of 1440p (plus some marginal overhead from FSR, a few percentage points in our own testing) but that looks more the part of a native 4K image than you’d expect.

The devil is in the details, though, and how close it can get to native 4K is the real challenge for AMD. If you want to see how close it actually gets, go check out our full AMD FSR testing, which is also where you can see how it fares against its main competitor today, Nvidia’s DLSS.

FSR and DLSS are functionally similar on the surface, but are actually two very different approaches to solving the same problem. The main differentiator, as we’ve heard from both AMD and Nvidia, is the lack of machine learning or AI with FidelityFX Super Resolution.

That could prove a blessing or a curse, but right off the bat it has the benefit of allowing AMD to run FSR on a wide range of graphics cards, even Nvidia’s. AMD cites that it has tested FSR on all Radeon GPUs from the latest 6000-series (including mobile) down to the RX 480/470/460, and Nvidia RTX 30-series GPUs through the 10-series.

AMD says you could run FSR on a lower-end device, although the overhead, and ratio of FSR cost to total frame cost, could make for diminishing returns. At least it won’t be taxing on older CPUs, as AMD says that shouldn’t have much impact on FSR performance. What will be something to keep an eye on, though, is bottlenecks elsewhere in your system—if your CPU is limiting your fps, FSR won’t do much to improve your performance.

But you can only find out by giving it a go. AMD FSR is coming to just a handful of games at launch, and you can find it in the options menu. You can also decide upon a quality preset for FSR from there, which will determine whether the FSR favours maximising frames or fidelity.