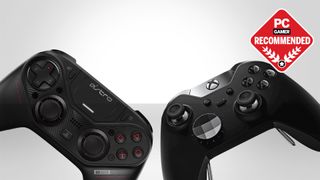 The best PC controller isn’t always a mouse and keyboard. Yeah I know, shocker. There are a lot of games—such as Shovel Knight and Forza Horizon—that are better played with a gamepad than a gaming mouse and gaming keyboard. The best PC controllers give you more freedom to take a lean back from the desk and relax, and can give you finer control over movement in plenty of cases.

It’s also true that some games end up with a monumentally confusing control system when mapped from console to PC if you end up using mouse and keyboard. And that’s true even for games held to be PC classics. The Witcher 3, for example, actually has a far more straightforward control system when played with the best PC controller.

In the end then, while the mouse and keyboard setup is great for a lot of things, especially shooters, there absolutely should be a place for the best PC controller in your arsenal.

If you have the cash to spare, the best PC controller right now is the Xbox Elite Wireless Controller Series 2. If you’re used to the shape and layout of an Xbox controller, you’ll find that this one will feel natural straight away. And while it does come with a seriously hefty price tag, the Series 2 boasts loads of neat extras.

If you use the Microsoft Elite Series 2 controller for more than ten minutes, you’ll understand why we have it at the number one spot. Everything about the Series 2 screams luxury. The near-endless customization options give you an unparalleled level of control (pun intended) over your gameplay. Being able to tweak, all aspects of the controller, like d-pads, shift paddles, and joystick tension, is an absolute godsend.

The most significant changes in the Series 2 over the Series 1 (which we also loved) include a neat little carrying case that doubles as a charging station for the controller’s new rechargeable battery with 40 hours of juice. Finally, with project Xcloud and Apple Arcade bringing some great games to mobile devices, you can easily pair the Series 2 controller via Bluetooth.

Spending $160 for a controller is a tough sell for most people, that’s near four times the price of an Xbox One controller, but if you’re a serious gamer who values performance and extreme levels of customization, the Series 2 is a no brainer and worth every penny.

The original Xbox One Wireless Controller was a staple for PC gaming. With the Xbox Series S/X release, we all were curious to see how Xbox improved on an already killer gamepad.

This controller retains a lot of what we loved about the original. Keeping it very comfortable overall design with texturized rubber grips makes you feel extremely great in your hands. Much like the original,  it boasts a vastly superior D-pad that you won’t dread using in fighting games and platformers taking cues from the Xbox One Elite Series controllers. You might have noticed a new button in the center of the controller; a much-requested Share button now lets you capture screenshots and gameplay footage without diving too much into the menus.

We capitalize Wireless for a reason, not because the word is a proper noun per sé, but because the Xbox Wireless controller of late leverages Microsoft’s wireless protocol it calls “Xbox Wireless.” Though the name could benefit from some creative workshopping, you can take solace in the fact that, after 2016, the Xbox Wireless controller graces us with a much-needed helping of Bluetooth compatibility. And now it’s practically standard fare for console transplants deterred by the learning curve mouse and keyboard gaming presents.

The PlayStation 5 DualSense has a “you have to touch it to believe it” quality thanks to its new haptic motors and “Adaptive” triggers, which can offer resistance under your finger. Firing a bow can actually feel like firing a bow, for example. The rumble is also easily the best and most nuanced we’ve ever felt in a controller. It really is as good as people say.

The bad news: the DualSense’s most advanced features don’t work in PC games yet, since games will need to be programmed to take advantage of them. But Steam already offers full support for the controller, so it’s at least a breeze to plug in and use like any other pad. It’s a hair less comfortable than the Xbox Series X controller, and not as simple to use in non-Steam games, but if you prefer Sony’s analog stick layout or love gyro aiming, this is the one to get.

And maybe someday we’ll see PC games take advantage of those new triggers and haptics, too.