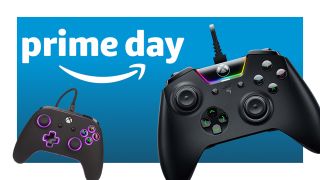 PC components are more or less out of the question when it comes to Prime Day deals but PC controllers are game on. We’ve found a handful of deals on some of the best PC controllers going and listed them below so that you can alternate from your keyboard and mouse every once in a while.

There’s a time and a place for a PC controller, and for me that’s mostly when I’m too tired to sit upright at a desk. Sometimes you just want to crash into the comfort of a sofa, controller in one hand and cold beverage in the other, and play something that doesn’t require any aim whatsoever.

Similarly, you’ll want a few controllers handy for co-op games, racing games (when you’re not privy to a wheel), and really anything else you can think of that requires some degree of analogue control.

I have something to admit, though, I’m a big fan of the standard Xbox Controller—one and the same with the kit bundled in the box with any Xbox console. It’s a comfy and very well thought out design, and can be easily plugged into a PC for a little cross-platform action. In that regard, the standard Xbox Wireless Controller remains as good a choice as ever, despite not really seeing much in the way of Prime Day discounts.

That said, if you want something a little more unusual, there are plenty of alternatives enjoying a period of low prices over the next few days to potentially pick up. Check them out below.