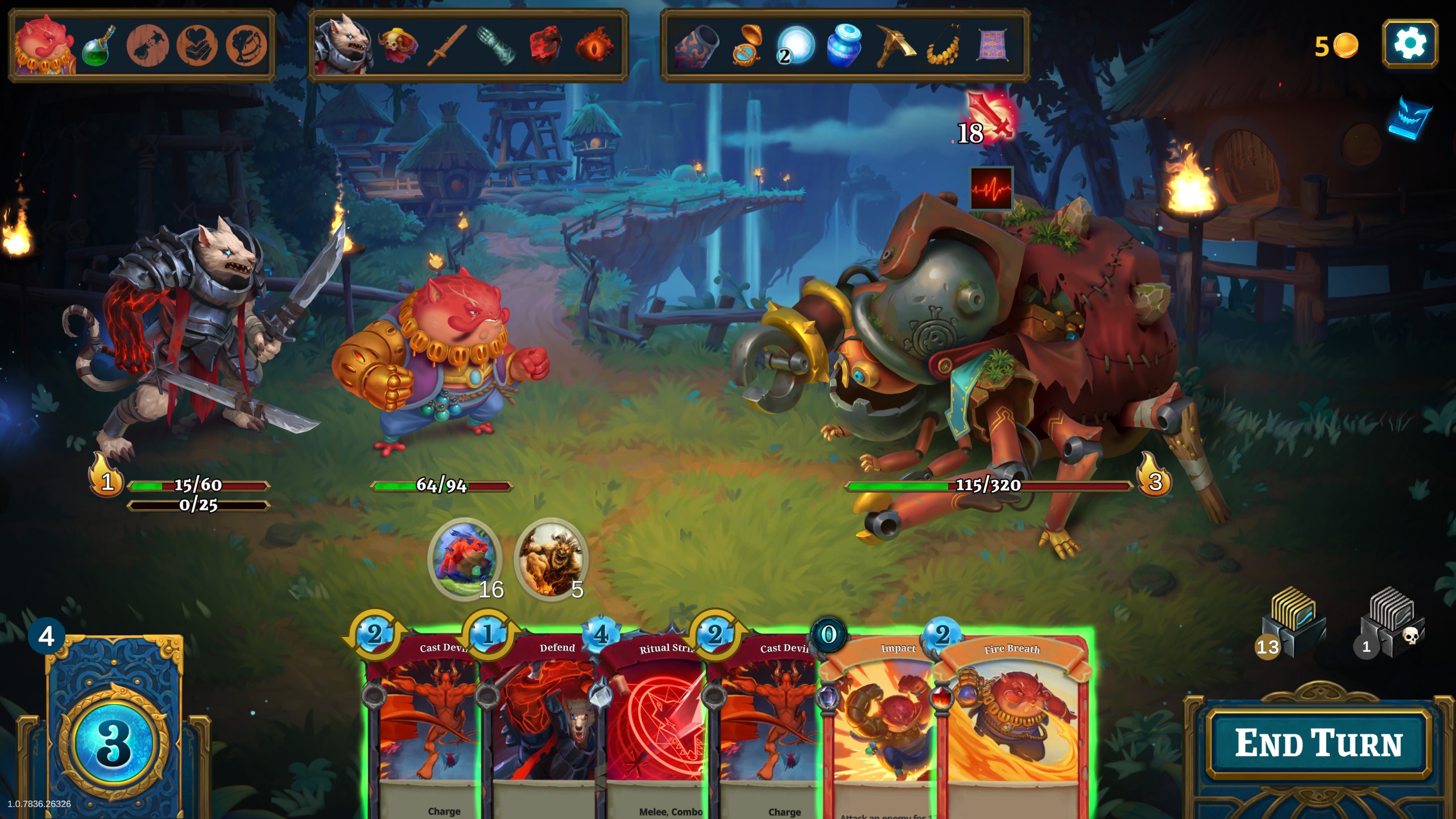 Those who’ve found their niche in the recent trend of deckbuilding and dungeon-crawling roguelikes will find something to enjoy in Roguebook, a confident, competent release from card game development veterans Abrakam Entertainment, the creators of Faeria. Set in the same world, it’s a colorful, whimsical, and charming fantasy. It also very proudly fits the genre mold, a run-based game that lets you iteratively unlock new cards, treasures, and characters for increasingly powerful builds to take on self-paced challenges.

Roguebook lifts some great design from other recent roguelite games. It pulls in a Hades-esque buffet of advanced challenges to mix and match after you first “beat” the game. It has Slay the Spire’s flurry of weird artifacts to collect and use. It even relies on an old deckbuilding staple, asking you to mix-and-match two card pools each run, which was used to such great effect in Monster Train. Your deck itself even levels up, with your card count giving you points to spend on randomized talents.

To its credit, and to its detriment, nothing in Roguebook is particularly novel. Its familiar parts are arranged in a new way with a few clever twists. Your deck is a combination of two out of the four characters, each with their own unique card set and talents. With your two picks you move into the book’s blank pages, a hex grid, and explore by spending limited brushstrokes and ink splats to reveal unmapped parts of the book. Out there you find gold to use at the shop, magic cubes to draft new cards from, adventure events with weird consequences, and combats to flex your deck’s muscles against.

Fights are straightforward attack card versus block card brawls with a few twists. Your two characters have positions, leading and following, and their own health, and cards often shuffle them around. Moving characters is a big tactical decision: Enemies always attack the leading character, while certain cards can only be used from particular positions. You can also summon allies, who rather than having a physical presence are more like battlefield effects that wear down opponents or give you a limited-use ability.

The reward for winning a combat encounter always includes more ink, for a limited reveal, or a new brush for a big one. When you run out it’s time to fight the level boss, and at the end of the third level you fight a big boss to win the run.

Win or lose you get experience in the characters that unlocks new cards, as well as general experience that unlocks new items. You also collect pages as you go, a currency you can spend on a tree of upgrades, unlocks, and permanent bonuses for future runs. In those future runs you’ll take on challenges that make you do things like take every new card you find, or that drastically increase the cost of new items in the mid-run shop.

A new run is a chance to experiment with the characters you pick. Sharra’s fast and aggressive, but relatively fragile when you can’t manage her tricks to avoid damage. There’s Sorocco, an ogre whose deck is all about shrugging off hits while you wind up a giant punch. Seifer’s a weird one, a pain-fuelled wolf whose all-out offensives are backed up by demon allies. Finally there’s Aurora, an awesome deck design that’s fragile on the face of it but can turn clever cardplay into a stream of healing that becomes damage as she overheals.

Roguebook’s most interesting twist is in gems, which you pick up mid-run and place in sockets on your cards. Those gems provide an upgrade to that card, adding bonus effects or boosting existing ones. They range from mundane, like +3 damage, or -1 cost, to pretty exotic, like one that always places the card in your starting hand. I loved another, the boomerang gem, that made it so instead of being discarded when cast, the card would always be shuffled back into your deck. Unfortunately, gems are feast or famine. Some runs you barely find any, others you end up socketing even your bad cards.

See, getting new stuff is based on exploration, which is based on revealing map hexes. There’s some strategy to that, using your ink pots cleverly and brushes sparingly you can puzzle out how to optimally reach the things on the map. But you can never reveal the whole map, and you can really just… luck out. Sometimes you don’t get enough cards, or gems, or gold, or items. Sometimes you don’t find half of the good stuff you know is out there.

It’s emblematic of Roguebook as a whole. The mechanics largely work, and when they’re going smoothly they’re a joy, giving you the kind of run-based deckbuilding fix you want. But games like Roguebook have to rely on either being immaculately and tightly designed to achieve perfection, or else provide such a sprawl of fun content that you won’t care otherwise. Roguebook doesn’t have either. A good game for both enthusiasts and idle fans of deckbuilding, but it doesn’t reach for the stars.