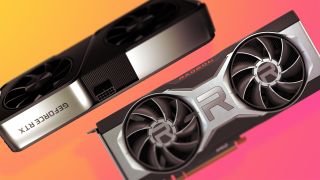 Buying a graphics card shouldn’t be a difficult task yet nowadays it can seem a damn near impossible one. That’s especially true if you would rather not pay over the odds for the latest silicon. There’s no use dancing around the subject: demand is high and supply is tight. If you want a graphics card this year, you need to be ahead of the game, know your stuff, and look in the right places.

As the main driving force for gaming performance, finding the worthiest graphics card at any price is a matter of utmost importance. Today, that usually means either an Nvidia GeForce RTX 30-series or AMD Radeon RX 6000-series graphics card—there are a few to choose from, right the way up from the RTX 3060 and RX 6700 XT to the all-powerful RTX 3090 and RX 6900 XT.

So pick your battles. Knowing which one of today’s top GPUs you’re after is helpful in finding any available stock. You are more than welcome to cast a wide net and go after just any old Ampere or RDNA 2 chip, and it will give you more chances to buy, but it also can be quite a bit more effort to comb every store page manually. If you focus your efforts and your attention on chasing one card, you may stand more of a chance of finding a new GPU without pulling your hair out.

And remember, it’s Amazon Prime Day from June 21–22. That might not mean much by way of graphics card sales but it may see other retailers following suit with discounts of their own on gaming PCs. We’re hoping for at least some deals on systems out of the retail bonanza, if not a complete stay on the engorged pricing we’ve come accustomed to in PC gaming lately.

You could attempt to manually refresh every store page in the hopes of striking gold on the next restock; that’s one way to go about it. Or, you could sign up to a trusty app that goes about trawling major retailers for you. It’s not a bot that tries to snap up stock the wrong way, it just does the refreshing so you don’t have to.

We’ve had success with the app HotStock in the UK, and sites such as Stock Informer offer a similar service in the US, although we’ve not used this service to score stock personally.

Some services may charge a small fee or require a sign up to notify you ahead of the rabble, and we recommend you only do that with services with good reviews. Sometimes it will get you ahead of the crowds, but you don’t want to give up all your personal info just to net a new GPU. Proceed with caution.

Similarly, you can find plenty of free Discord servers with dedicated stock alert bots and eagle-eyed community members, such as the popular StockDrops server. Then there are the heaps of dedicated Twitter accounts, like our sister site Tech Radar’s very own Matt Swider.

And don’t forget Twitch streams. Those dedicated to finding you stock will often fire out a deafening klaxon the moment stock appears. We recommend checking out Falcodrin on Twitch for Nvidia GPUs, but there are plenty of kind souls out there offering a similar service.

What I’m saying is to use the resources available to you, most of which are free, to make your life a little easier when trying to buy a graphics card. They really do work, and it’s a lot better than hitting F5 all day long.

It sounds silly, but the time it takes for you to enter your details at checkout can be the difference between securing a graphics card and walking away empty handed. We recommend making accounts at all the major tech retailers in your area when you decide to start seriously hunting, if only to be an inch ahead of the rest when stock finally arrives.

Similarly, retailers such as Newegg actually recommend using their app for swifter checkout. While we cannot confirm that is the case and not just a ploy to get you using their app, it may be worth it while you’re on the hunt for a GPU.

The retailers to watch are: