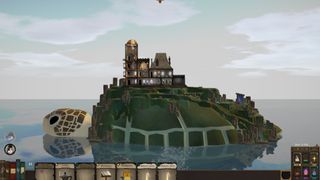 This fantastical tycoon game has been in Early Access for several years, but as of last week it’s officially in 1.0. That’s good news, because Spellcaster University is exactly the game you’re looking for, if you’ve ever wanted to manage your own Hogwarts (or indeed, any other non-franchised magic college). You’re the director of Spellcaster, and in that role you’ll need to lay out your college, recruit teachers, and decide what kind of magic you’d like to specialise in. Perhaps necromancy, or demonology, to name just two examples listed on the game’s Steam page? Sounds like fun, and the game’s “very positive” rating is promising.

It’s a puzzle platformer, but one look at that art style and you’ll see why it stands out. Set on an archipelago once inhabited by giants, you play as Mo, whose tinkering skills she hopes to use to bring these giants’ technology back to life. Good idea or bad? Judging by the trailer there are occasions when the shit does hit the fan, but the artful comic book illustrations situate Minute of Islands somewhere more contemplative than menacing.

Launched into Early Access last week, World End Diner has a very strong whiff of Stardew Valley about it, with its gently hued top-down pixel art world. But there’s a nice twist here: You’re managing a farm, you’re cooking on the farm, but as the name implies you’re also running a diner. Why the heck a diner? Silly question: To feed all the pretty pixelated animals, of course! (and the robots, because why not). The Early Access period will last around a year, during which time heaps of content will be added, including a more expansive world, crafting, more animals (and robots), and more.

There’s quite a few modern indies that take the style of ye olde Game Boy games, and Lasagna Boy is only the latest. That said, it seems to be among the most interesting: While the colour palette is accurate, there’s a much easier-on-the-eyes approach to the animations here, and Trashy Rascal Studios have sought to make a horror game rather than a mascot platformer. You’ll be puzzling and platforming in Lasagna Boy, but crucially, don’t let its slightly cutesy appearances fool you: expect scares and decapitations.

Look, I don’t know who needs a better sales pitch than “hardcore platformer starring an onion-headed boy,” but if for some reason you do, read on. I don’t think Garlic is going to rewrite gaming history but its art style is definitely something to write home about: it looks like Undertale, if Undertale had the kind of smooth-as-heck animations a gruelling twitch-oriented platformer requires. This one is inspired by Celeste, Meat Boy and Gato Roboto, but even if you’ve had a gutful of games in the mould, Garlic has an art style worth investigation.

These games were released between June 7 and 16 2021. Some online stores give us a small cut if you buy something through one of our links. Read our affiliate policy for more info. ‌