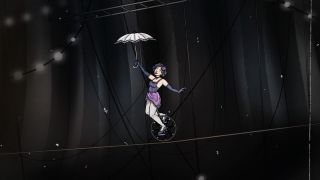 Here’s a deckbuilding RPG, but instead of smiting slime with cards, or goblins and monsters with cards, you’re putting on a circus. Specifically, a roaming circus in late 19th century America, which according to the game’s Steam description is “full of bizarre folklore, brutal crime, and social inequality.” In addition to fighting card duels against 32 audience types (with the power of entertainment)  you’ll also need to manage your circus camp and build up your talent from the 15 performers available. This looks like a really novel take on the deck builder, especially if you’re tired of canned fantasy tropes.

Here’s a rare beast: a new single player first-person shooter that doesn’t look like it was made in the 1990s. Severed Steel has an elegant art style reminiscent of Superhot or the Syndicate FPS (remember that?), and it’s all about movement and destruction. The voxel environments have a huge degree of destructibility, there’s bullet time and a stunt system, and the AI is “dynamic” and “unscripted.” It’s getting a bunch of really good reviews on Steam, and there’ll be a lot to sink your teeth into if the included level editor becomes popular.

In Toem you play as a cute little bug (or mouse? hard to tell) with photographic eyes. That gives you the power to solve problems and mysteries, which is what you’ll spend the bulk of your time doing here. Toem is basically a free roaming adventure game about taking nice photos for people in a peaceful monochrome town, and there even appears to be a “honk” button, which more games should have, frankly. Definitely one to queue up next time you’re looking for a zen experience.

Bright Lights of Svetlov is a first-person narrative and exploration game set in a 1980s Soviet town. The protagonist goes about their daily domestic business in this town, which has a “carefully depicted atmosphere of [the] USSR,” and during that time the player will learn of a family’s “gradual descent under harsh trials.” It’s a short affair—developer Vladimir Cholokyan writes that it has a 1.5 hour runtime—so approach it as an enveloping, filmic mood piece.

Mandinga is ostensibly a JRPG, but it’s set in 1820s Brazil and is developed by a Brazilian studio. It follows the adventures of two heroes, Akil (“a Muslim with diverse knowledge”) and Obadelê (“a strong capoeirista warrior”). The Steam page doesn’t have any details on why these heroes are together and what their shared goal is, but Mandinga definitely looks and plays like a ye olde JRPG: there’s dice-based turn-based combat, and a gorgeous pixel art world to explore.

These games were released between September 13 and 20 2021. Some online stores give us a small cut if you buy something through one of our links. Read our affiliate policy for more info. ‌