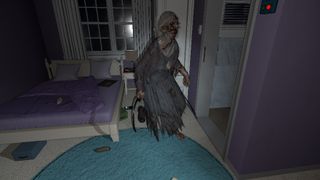 An update for cooperative horror game Phasmophobia launched on September 18th, kicking out some nice changes to the indie for its very successful first year. If you forgot, we published a piece where the author called it “the best ghost game ever made.” We also gave it an award as the best co-op game of 2020.

For its first birthday, Phasmophobia has gotten a total redesign of the journal, making tracking what ghostly goings-on are relevant much easier. It’s now far simpler to navigate, and you can cross off evidence as you go.

Perhaps most relevant for some of us, I won’t say who, it’s now a bit nicer to lose. Rather than a flat $10 for failing a contract, you instead get an insurance payout based on the chosen difficulty. You’ll also now get to know what type of ghost you failed against, which is nice for learning the game’s 16 and rising flavors of spooky goober.

As sprinkles on top, Phasmophobia now has an offline singleplayer mode.

The update was accompanied by a short, but sweet note from the solo developer who started Kinetic Games. “It has been an amazing year for Kinetic Games and Phasmophobia and I would like to thank everyone for their amazing support. Today, Phasmophobia is one of the highest rated games on Steam which is incredible and something I never imagined happening,” it says. You can read the entire update on Steam.