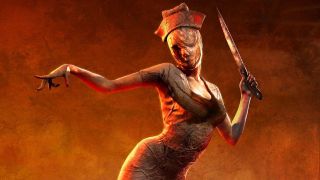 In April, a trailer for a game called Abandoned by Blue Box Studios was posted to the PlayStation channel. (The studio later suggested it will be coming to PC as well as PS5, tweeting that, “The PC community shall rejoice.”) It’s a vague trailer, suggesting a first-person shooter set in a spooky rural area. There are woods, and a sign for “God’s town”, and a voiceover ranting about a community led by “a religious nutjob”.

The Silent Hill community, desperate as ever to hear about a new game in the series, quickly convinced themselves that Abandoned was a revival of Silent Hills, the cancelled Hideo Kojima project. The theory has an entire subreddit of its own, The Blue Box Conspiracy.  Among their evidence is the fact that Blue Box Studios tweeted “Abandoned = (First letter S, Last letter L)” and that the studio director, Hasan Kahraman, has a surname that’s Hideo translated into Turkish. That might seem like a stretch, but to be fair when Metal Gear Solid 5 was being teased it was announced as a project by “Moby Dick Studios” led by Joakim Mogren, with Joakim being an anagram of Kojima.

Blue Box Studios has since tried to explain that Abandoned is not Silent Hill. It announced that, “We have no relations with Konami. Silent Hill is owned by Konami. We do not have any relations with Hideo Kojima. It was never our intention to tease the name as Silent Hill. We sincerely apologize for this.” Kahraman had already been interviewed by IGN, and tried to defuse the rumor there, saying, “It did bother me a bit as we as a team are so excited to tease a bit of our game and then this conspiracy comes.”

Neither statement did much to slow down speculation, as fans had one more shred of evidence to cling to. The Official Konami Shop merch store tweeted that “New merch is rolling into our shop, from a cursed place. #SHLSS” and followed it with an image of Pyramid Head and the words “Coming soon…”

Today, the Konami merch store revealed that what it’s been teasing is actually just some new Konami merch. A skateboard with a booby nurse from Silent Hill 2 on it. The #SHLSS hashtag stands for “Silent Hill Limited Series Skateboard”.

As OldGhostBlood wrote on the Blue Box Conspiracy subreddit, “I expect nothing from Konami and I’m still disappointed every time.”