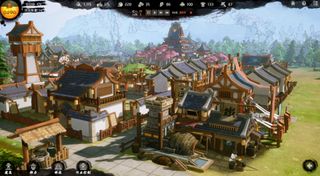 Chinese indie studio Star Chess is working on a city builder with a particularly Chinese twist, taking the land god of Taoism to the video-game-logical conclusion: In The Immortal Mayor you’re the local land deity, and with more worshippers comes more prestige, therefore it’s up to you to ensure the prosperity of the locals. To do so, you direct the expansion of their town, including building protection from attacks by wild monsters, and use your godlike powers and divine inspiration to direct the town around.

It’s a game you can demo for Steam Next Fest, and a bit of a buried gem in the rough. It’s due to release into Early Access in July 2021.

It’s a neat idea, as your town gains more believers—not everyone will worship you at first—you gain divine power more quickly, and as your town grows you grow in importance in the hierarchy of gods. Making friends with other gods by building temples to them in your town, assigning priests, and providing rare incense to them lets you use their powers to benefit your village as well.

It’s a cool twist on the usual survival city-builder conceit of having you work as a sort of omniscient “mayor,” instead making you a specific character with specific goals and a very precise relationship with the people you watch over. You want to build education, because them your priests will be wiser. You want to bestow divine decorations not just because they make peoples’ houses nicer, but because they’re a direct example of your benevolence.

The demo itself seems to be crashing a lot for some players, by the way, but not a lot for me. (About once an hour.)

You can find The Immortal Mayor demo on Steam, where it’s part of the Steam Next Fest, a massive event celebrating upcoming Steam releases with demos of the games. We’ve also compiled a list of our 16 favorite Steam Next Fest demos and a list of the demos for 52 games announced at E3 on Steam. If you want to play those, act quick: Steam Next Fest ends on June 22nd, and the demos with it.